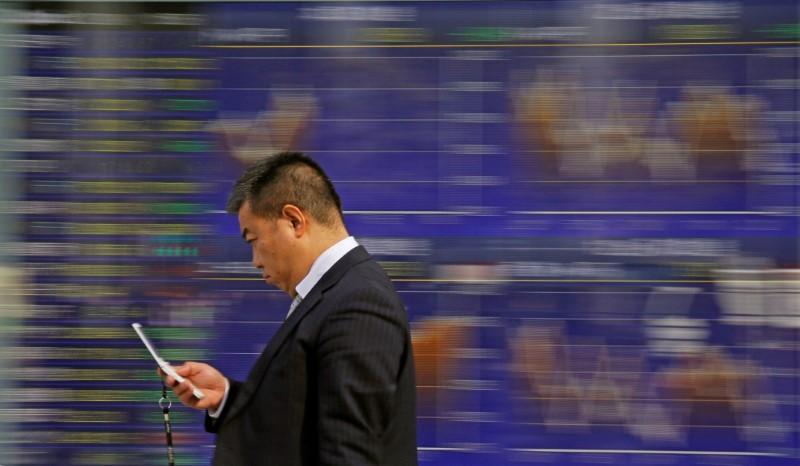 LONDON (Reuters) – Global equities trod water on Tuesday ahead of a U.S. Federal Reserve policy meeting, while investors reassessed their views of tech stocks following a slump in Facebook’s shares after reports of data misuse.

The MSCI world equity index .MIWD00000PUS, which tracks shares in 47 countries, was flat in percentage terms by 0901 GMT, while the pan-European STOXX 600 equity index slipped 0.1 percent.

Tech .SX8P stocks underperformed in Europe as the sector fell 0.3 percent, taking its cue from Monday’s falls for U.S. peers on the back of fears of stiffer regulation as Facebook came under fire following reports it allowed improper access to user data.

In the U.S., Facebook (FB.O) tumbled 6.8 percent on Monday as the social media colossus faced demands for action from U.S. and European lawmakers following reports that a consultancy that worked on President Donald Trump’s election campaign may have improperly gained improper access to data on 50 million Facebook users.

Likewise an accident involving an Uber Technologies Inc UBER.UL car on Monday which resulted in the first fatality involving a fully autonomous vehicle further weighed on sentiment around tech.

“There certainly are some stocks where valuations look somewhat stretched … so we’re focusing our exposure within the technology sector on the cheaper end of the market,” Mike Bell, global market strategist at JPMorgan Asset Management, said.

“We’re a bit more cautious on the more expensive and some of the more popular names in the sector,” Bell added.

Though tech was a weight, Asian shares recovered to end in positive territory thanks to a rise in health stocks.

The UK’s FTSE 100 .FTSE index slightly outperformed the broader European market, up 0.1 percent, as investors cheered a transition deal reached between Britain and the European Union on Monday.

“Investors lightened their positions ahead of the Fed’s policy meeting. The markets are completely split on whether the Fed will project three rate hikes this year or four,” said Hiroaki Mino, senior strategist at Mizuho Securities.

In addition, worries about the potential for a trade war cast a shadow after U.S. President Trump imposed tariffs on steel and aluminum.

The Trump administration is also expected to unveil up to $60 billion in new tariffs on Chinese imports by Friday, targeting technology, telecommunications and intellectual property, two officials briefed on the matter said Monday.

While long-term U.S. bond yields were muted, short-dated yields rose ahead of an expected rate hike from the U.S. Federal Reserve after its two-day policy meeting starting on Tuesday.

The yield on 10-year Treasuries was little changed at 2.857 percent US10YT=RR, 10 basis points below the four-year high of 2.957 percent touched a month ago.

Still, with a Fed rate rise already fully priced in, the dollar barely gained from the prospect of a rate hike.

The euro EUR= moderated gains, rising to $1.2341 after bouncing on Monday following a Reuters report that European Central Bank officials were shifting their debate from bond purchases to the expected path of interest rates.

The yen was little changed at 106.37 per dollar JPY=, with traders wary of any new developments in a cronyism scandal that has eroded support for Japanese Prime Minister Shinzo Abe.