LONDON (Reuters) – World stocks slipped on Tuesday and the dollar retreated from a three-week high after a U.S.-North Korea summit aimed at the denuclearization of the Korean peninsula.

FILE PHOTO: The German share price index, DAX board, is seen at the stock exchange in Frankfurt, Germany, March 20, 2018. REUTERS/Staff/Remote

The MSCI All-Country World index .MIWD00000PUS, which tracks shares in 47 countries, fell nearly 0.1 percent on the day. The dollar .DXY slipped into negative territory in morning trade in Europe after earlier reaching a three-week high. It was last flat on the day.

Investors had mixed reactions to the summit, which ended with the signing of a joint statement that gave few details on how the goals set by both sides would be achieved.

“Any de-escalation is good, because in the background you always have worries about these situations,” said Old Mutual Global Investors European fund manager Ian Ormiston, adding trade conversations over the weekend at the G7 summit were more concerning.

Others, such as RBC Capital Markets’ head of Asia FX strategy Sue Trinh said there was “nothing particularly game-changing” about the summit and both sides stood far apart on what denuclearization means. 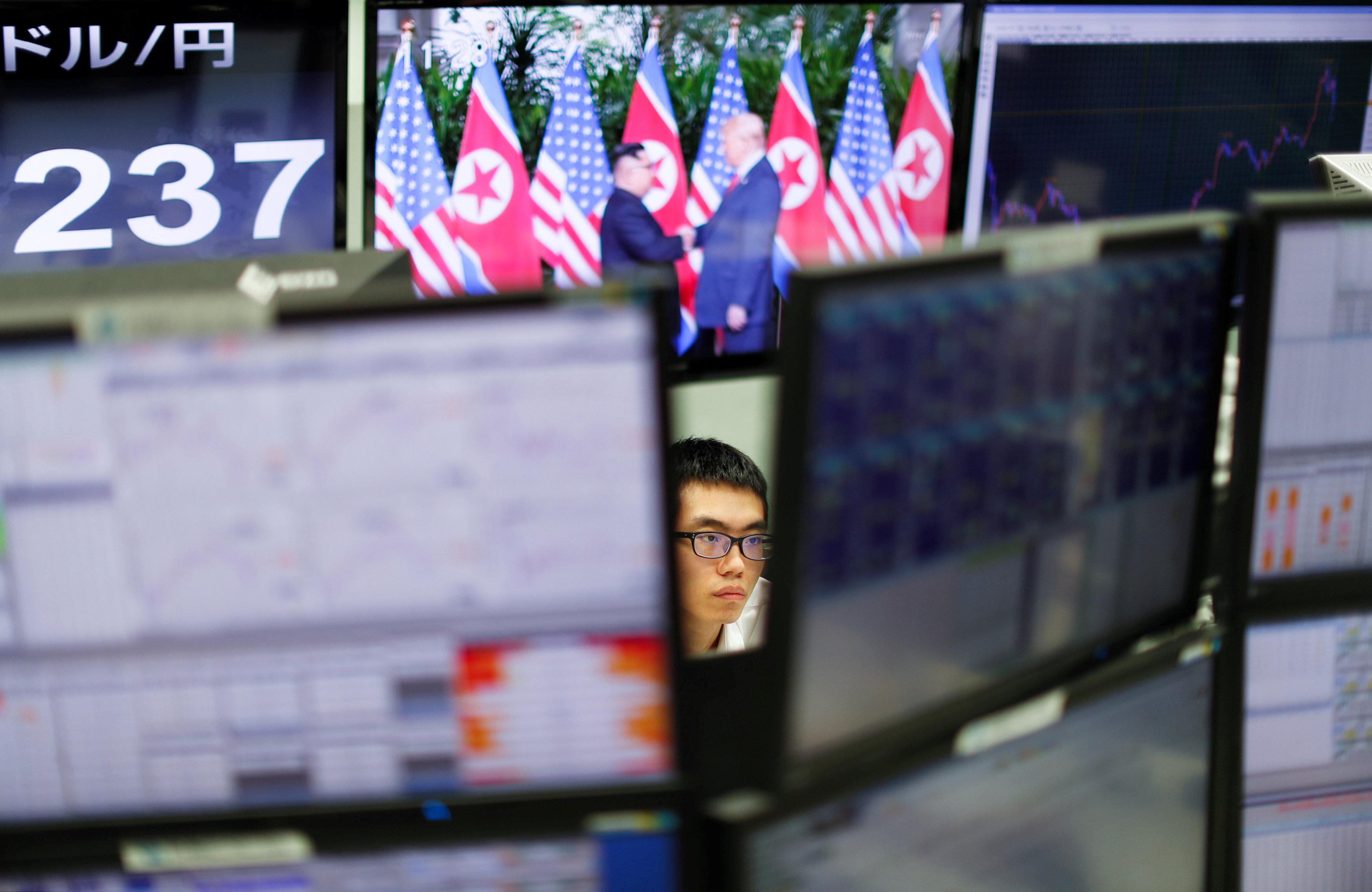 In Asian equity markets, trading was volatile with Japan’s Nikkei .N225 paring early gains to close 0.3 percent higher after earlier rising as much as 0.9 percent.

MSCI’s broadest index of Asia-Pacific shares outside Japan .MIAPJ0000PUS seesawed between positive and negative, and was last up 0.15 percent. South Korean shares .KS11 were weaker while Chinese shares were buoyant after starting in the red. The blue-chip CSI 300 index .CSI300 jumped about 1.3 percent.

Investor focus was shifting to the two major central bank meetings later this week. The U.S. Federal Reserve meets on Wednesday, where it is widely expected to raise interest rates for the second time this year.

Futures contracts indicate a 96 percent probability the fed funds rate will be raised a quarter of a percentage point on Wednesday, according to CME Group.

Investors are focused on how the U.S. central bank characterizes its monetary policy as borrowing costs return to normal amid an economic expansion. The Fed may signal whether it feels the era of loose money is, in effect, over.

U.S. inflation data due later in the day will also add to speculation over the path for U.S. interest rates later this year. Markets now are pricing in slightly more than one chance in five rates will be raised for a fourth time this year.

On Thursday, the European Central Bank meets, and some expect the Bank to provide guidance for an ending of its bond-buying program at the end of this year.

The spread between Italian and German 10-year borrowing costs narrowed as the U.S.-North Korea summit drew to a close, adding a relief rally on reassuring comments from Italy’s new economy minister [GVD/EUR].

The British pound was up 0.1 percent GBP=D3 as a crucial parliamentary debate began on amendments to Britain’s European Union withdrawal bill. [GBP/]

The euro EUR= was flat.