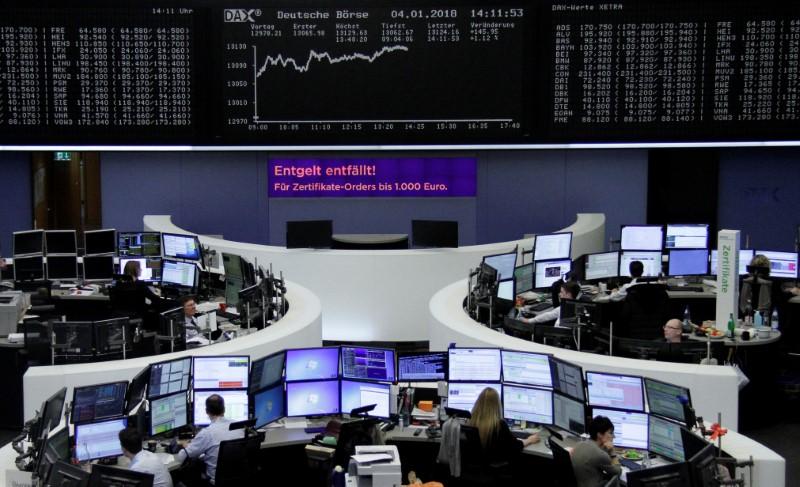 Barely recovered after an early-February sell-off, equity sentiment has been shaken by Powell and by data showing China’s manufacturing sector slowing to its weakest in over 1-1/2 years and Japanese industrial output down the most since March 2011.

The U.S. Federal Reserve chief, in his debut testimony to Congress on Wednesday, struck a mildly hawkish note, noting inflation had risen since December and vowing to prevent the economy from overheating.

That was enough for traders to add bets on the Fed squeezing in another rate rise this year, with futures tied to target policy rates now pricing a one-in-three chance of a fourth hike.

But a fall in new orders for U.S.-made capital goods for the second month in a row, plus the dismal Chinese and Japanese numbers, have made investors fret about a possible setback to growth, especially in China, the world’s No. 2 economy.

Emerging equities fell 1 percent, pulled down by a 1.4 percent tumble in Hong Kong and on track for their biggest monthly loss since November 2016, while Japan’s Nikkei lost 1.4 percent and snapped a five-month run of gains.

European shares lost around 0.3 percent and have shed 3.6 percent in February, their first monthly loss since November. Equity futures suggested a flat to slightly firmer session for Wall Street.

Not everyone is bearish however.

“Equities and risk assets may wobble as yields rise, but stronger growth should be good for corporate earnings and offset the impact from the expected increase in central bank policy rates,” the world’s biggest asset manager BlackRock said.

Analysts at Unicredit agreed. They said that while markets might price in higher U.S. interest rates, these would likely remain modest and also hinge on economic data staying robust.

“As long as both of these conditions are met, we do not believe that (Powell’s) testimony threatens to derail risk appetite, at least not in a sustained way,” they told clients.

Markets are ending February pretty much as they began it — on a sour note, spooked by concerns U.S. inflation would pick up and that central banks could end up tightening policy further and faster than originally anticipated.

Those fears were behind the selloff that wiped trillions of dollars off world stocks in less than a week early in February. The MSCI index remains more than 5 percent below record highs hit at the end of January.

Their path higher is likely to be hindered by bond markets, with U.S. 10-year yields close to the psychologically key 3 percent level and up 17 basis points this month.

Headwinds also could come from the dollar, which is set for a monthly rise against a basket of currencies following three months of declines and which touched three-week peaks after Powell’s comments.

Analysts at UBS Wealth Management predicted that U.S. GDP data due later in the day would reinforce “the picture of an economy performing at or above trend, justifying four rate hikes this year”.

But the Bank of Japan and European Central Bank could act as counterweights to a hawkish Fed — euro zone inflation for February at 1.2 percent showed on Wednesday that the ECB’s near-2-percent target remains years away.

German 10-year bond yields meanwhile are set for their first monthly fall since October, down 2.5 basis points in February, while Japanese yields are just off two-month lows hit earlier this week

Additional Reporting by Swati Pandey in Sydney and Dhara Ranasinghe in London; Editing by Catherine Evans