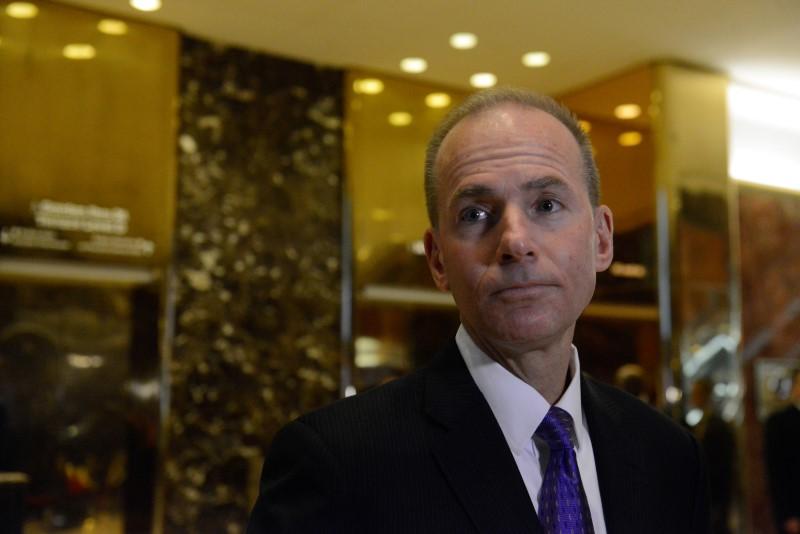 CHICAGO (Reuters) – The head of Boeing Co (BA.N) said on Thursday the U.S. planemaker can absorb transactions on the scale of a proposed tie-up with Brazil’s Embraer without putting at risk internal investments in its business or returning cash to shareholders.

Chairman and Chief Executive Dennis Muilenburg also told Reuters in an interview that Boeing was “making progress” in talks with the Brazilian aerospace company. It continues to study a number of possible structures for a deal, which some outside analysts have said could value Embraer at $5-6 billion.

“Acquisitions of the scale of Embraer are not only very doable for us, they are also things we can selectively do, aligned with our (cash deployment) strategy,” Muilenburg said.

“We have plenty of cash horsepower to do all three things: invest organically, return to shareholders and then make these targeted acquisitions,” he added.

Boeing is targeting operating cashflow of $15 billion and combined research & development and capital expenditure of $5.9 billion this year. It has pledged to return 100 percent of free cashflow to shareholders.

Brazilian President Michel Temer is weighing a proposal for the two companies to forge a commercial aviation venture, his office said last week, after the government opposed an outright takeover of Embraer which also builds military aircraft.

“We are not done yet; there is still work to go. But we are making progress so I am hopeful that we can complete it,” Muilenburg said, reiterating the deal was not a “must” for Boeing.

“We continue to evaluate all parts of the enterprise, different potential ownership structures” that range from support to full ownership, he said.

Asked whether such overseas tie-ups were more difficult with rising protectionist sentiment, Muilenburg said Boeing would not let up on its global expansion which, if done strategically, would increase jobs in the United States and abroad.

Speaking in his 36th-floor Chicago office with views across to Lake Michigan, Muilenburg declined to be drawn on the issue of steel and aluminum tariffs just prior to U.S. President Donald Trump’s announcement about them on Thursday.

He reiterated his longstanding general support for open trade. “Our position is we want free and open trade, good solid global trade is good for our business and we are going to be strong proponents of that,” he said.

Muilenburg downplayed concerns of a backlash from China, which has ordered thousands of jets. Boeing plans to open a new aircraft completion plant in China.

“You see some tough rhetoric but when I look below the surface, and having talked with both President Trump and President Xi (Jinping), I think there is a true desire to have a productive trade relationship between the two countries,” he said.

Muilenburg said Boeing had not decided whether to appeal after losing a price dumping case against Canada’s Bombardier (BBDb.TO) but would sue again if provoked to do so again.

He said Boeing was in “no rush” to decide whether to launch a new mid-market jetliner, which could enter service in 2024-25.

“It is a decision we will probably get to over the next year or so,” he said.

The jet is expected to pioneer an advanced production system for Boeing, which is already building on record output of its smaller 737s, Muilenburg said, noting that suppliers are keeping up with demand.

Asked about engine makers, most of which have faced technical or management problems in recent years, Muilenburg said: “It is certainly something we are keeping an eye on. I will say that despite some of the challenges you have seen out there, our engine partners have been doing well on our commercial programs.”

Boeing’s biggest supplier, General Electric Co (GE.N), is undergoing a corporate makeover after heavy losses, but it is delivering engines on time for the 737 MAX through its CFM venture with Safran of France, Muilenburg said. Airbus has voiced concern about delays in similar CFM engines.

GE, whose stock was the worst performer in the Dow Jones industrial average last year as Boeing led the index higher, is coping well with the development of a new engine for the 777X jet, he said.

“While it is an area to watch, I feel comfortable with where we are at,” Muilenburg said.