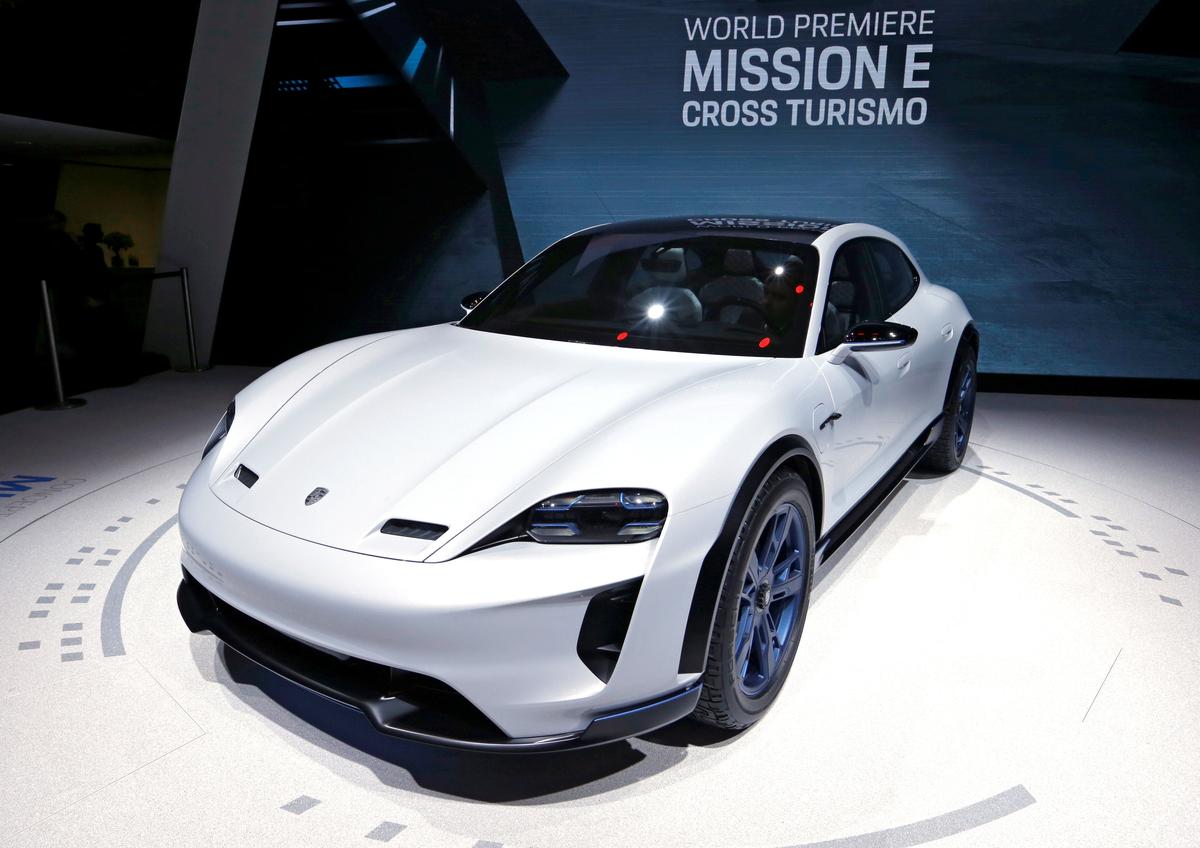 The Porsche Mission E Cross Turismo is seen during a presentation at the 88th International Motor Show at Palexpo in Geneva, Switzerland, March 6, 2018. REUTERS/Denis Balibouse

Executives gathered on Tuesday at the Geneva auto show are grappling with unpalatable choices: re-engineer existing vehicles at huge expense, restrict sales of some profitable models; or risk hundreds of millions of euros in penalties.

Others are clinging to the hope that the image of the latest Euro 6 diesels may yet be rehabilitated, and their fortunes restored.

“But it’s our job to solve these problems,” he said. “I’m firmly convinced that diesel will experience a revival.”

But a fresh flurry of bad headlines and the growing prospect of outright diesel vehicle bans are already sending their sales into a steeper tailspin.

Some industry insiders predict carmakers will be forced to rein in sales of larger models by raising prices to avoid overshooting the EU’s 95 grammes/kilometer CO2 target.

Ford (F.N) is reviewing its European line-up in light of diesel’s slide and is likely to “restrict the sale of some vehicles that push us over the limit”, a company source said.

Steven Armstrong, the carmaker’s head of European operations, played down that prospect.

“We’re not having to rethink the model line-up,” he said. “Of course we’ll have to fine-tune the volume by powertrain by vehicle, but it’s not going to be a fundamental shift for us.”

Initially sparked by VW’s 2015 emissions test-cheating scandal and subsequent studies exposing the true levels of NOx emissions, the diesel slump has since deepened rather than stabilizing, as Mueller and others had hoped it would.

Sales of diesel cars fell 8 percent in Europe last year, reducing their market share to 44 percent from a 55 percent peak in 2011. Partly as a result, average CO2 emissions increased in Europe in 2017 for the first time in a decade, according to researchers JATO Dynamics.

That was before the latest PR setbacks, in which VW admitted using monkeys and humans to test exhaust gas, and a court ruled that German cities were free to ban older diesel cars – joining Paris, London and a host of other urban centers that have vowed to run them off the road.

Diesel sales were down another 19 percent in Germany last month, and a whopping 24 percent in Britain, amid concern that the decline in second-hand values would give way to collapse.

French carmakers, which have relied heavily on diesels to meet CO2 goals, are now scrambling for alternatives. Renault (RENA.PA) has stepped up development of a low-cost hybrid known as “Locobox”, but the powertrain won’t even begin rolling out until 2021.

Fuel-saving 48-volt hybrids being rushed out across the Peugeot, Citroen and newly acquired Opel lineups are not expected to arrive before 2022 under current plans.

“The cost of CO2 compliance is one of the potential triggers of the next auto recession,” Houchois said. “Manufacturers are going to have to raise prices on larger petrol cars to meet their emissions targets, and that’s going to hit sales overall.”

Already last October, investment research house MSCI was warning that “all carmakers apart from Toyota (7203.T) are at risk of missing regulatory targets for fleet emissions in 2021”.

The Japanese carmaker is dropping diesels from its European fleet as it benefits from two decades of dominance in petrol-electric hybrids. Fiat Chrysler (FCHA.MI) is expected to announce a diesel phase-out in its mid-term plan, due in June.

German premium automakers are also better resourced to absorb the shock, by ramping up sales of plug-in hybrids already in their portfolios or pipelines while rushing out 48-volt technology to curb emissions across existing model lineups – including the two-year-old Mercedes (DAIGn.DE) E-Class.

But the strategy of leaning on costly plug-ins for CO2 compliance has limits, as well as profitability perils.

“The profitability of plug-in hybrids is below that of cars with pure combustion engines,” a company spokesman said.

That spells bigger trouble for volume brands, which lack the lucrative luxury models to offset “compliance cars” sold at lower profit or even a loss to meet CO2 goals.

“If everybody wants to sell a lot of electrified vehicles, the prices are going to collapse,” said one PSA Group engineer.

“And since it’s a market that’s already quite unprofitable, people are just going to lose their shirts.”