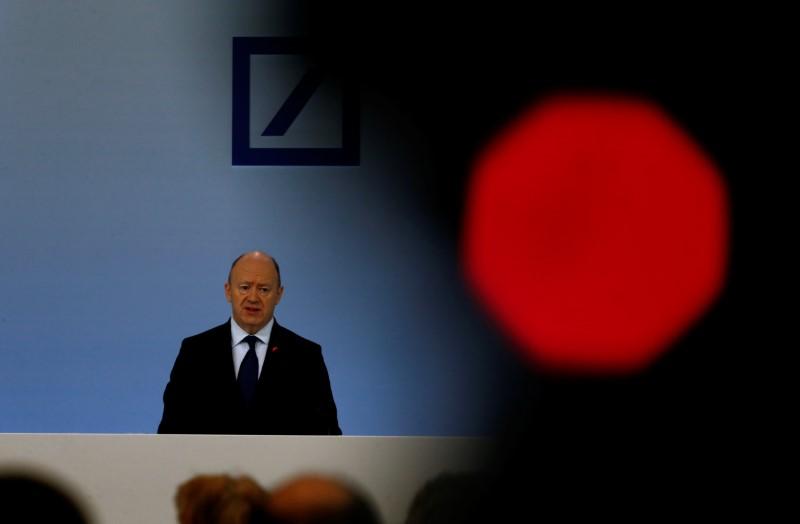 FRANKFURT (Reuters) – Deutsche Bank (DBKGn.DE) has begun searching for a new chief executive, two people familiar with the matter said on Tuesday, as investors grow frustrated with the slow turnaround of the loss-making German lender.

Paul Achleitner, chairman of the board, has initiated a search to replace John Cryan, the British chief executive officer who has been in office less than three years, the people said on condition of anonymity.

A senior executive at Deutsche separately cautioned that there was little that Germany’s largest bank could do to quickly improve sentiment.

“What we are working on is changing long-term processes. That’s a real way to cut costs, but this takes time.”

The CEO search, which is in the early stages, and the call for patience come after a flurry of negative headlines for the bank after it reported a third consecutive annual loss.

The bank said its loss in 2017 was larger than initially reported, and it has warned about conditions in the first quarter.

The Times newspaper reported on Monday that Deutsche Bank was seeking to replace Cryan after a boardroom row over the bank’s future and alarm at its performance.

The paper said that the bank had approached Richard Gnodde, a senior executive of Goldman Sachs but that he was believed to have turned down the position.

All of the individuals cited by the Times declined the position, one of the two people familiar with the matter told Reuters.

“The fact is, as it stands today, Achleitner is empty-handed,” said the person, referring to the bank’s chairman who would oversee the appointment of a new CEO.

Deutsche Bank under Cryan has stabilized after speculation in late 2016 that it would need a state bailout to stay afloat.

However, the enduring fragility of the bank and its low share price have generated speculation it could be a takeover candidate. But the senior executive refuted that notion.

“Nobody wants to,” take Deutsche over, the banker said.

“We need to show that we can regrow the revenue base before we are attractive. And remember this is Deutsche. You cannot just bid for us.”

The bank has raised capital and made progress on its two retail banking divisions. Last week, it achieved a milestone in its turnaround by floating its asset management unit, DWS.

However, stories have emerged of discord at the top.

One board member, Kim Hammonds, told leadership at a recent meeting that the bank was “the most dysfunctional company” she has ever worked for, the Frankfurter Allgemeine Sonntagszeitung quoted her as saying.

Investors have grown increasingly jittery about the pace of the bank’s turnaround.

“We made the point clear that we are frustrated,” Huenseler said.

Since then, bad news from the bank has continued to flow and some investors are calling for a replacement for Cryan.

“I think a reshuffle at the man helm is probably the right thing to do,” Huenseler said. “I don’t think Cryan is the one who has the vision to lead Deutsche Bank into the new phase.”

While Achleitner has been sounding out potential candidates, he has not initiated a formal succession process with the bank’s nomination committee made up of directors.

On Tuesday, Deutsche Bank cited further progress in its restructuring by announcing the sale of its private and commercial banking business in Portugal to Abanca for an undisclosed sum.

“With the transaction, Deutsche Bank continues to execute its strategy to sharpen its focus and reduce complexity,” Deutsche Bank said in a statement.

In February, Cryan said the bank was aiming for a profit in 2018 but has not been more specific.

“Investors in Deutsche Bank have had to be patient,” finance chief James von Moltke told investors last week at a conference in London. “We are asking for continued patience.”