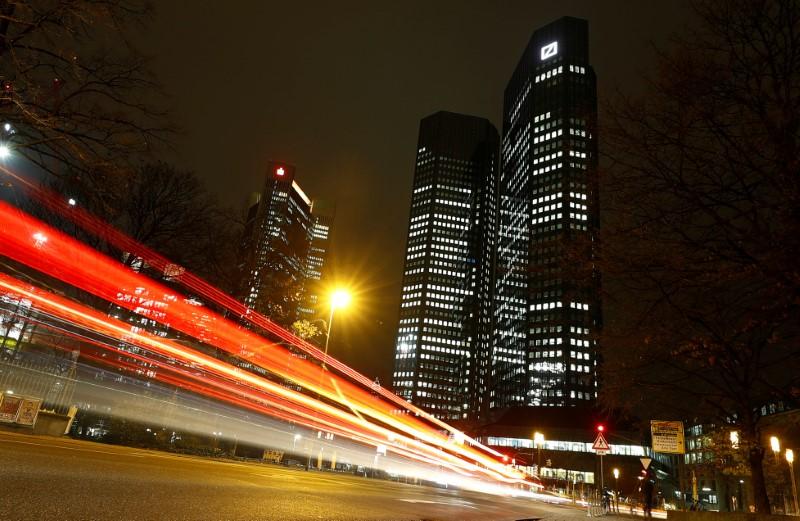 FRANKFURT (Reuters) – Deutsche Bank (DBKGn.DE) paid bonuses worth 2.3 billion euros ($2.83 billion) for 2017, four times higher than the previous year even as the German lender warned on costs for 2018 and reported a bigger 2017 loss than previously disclosed.

Germany’s flagship lender said on Friday that its top 12 managers would forego payouts for 2017 after the bank said it lost 735 million euros, the third annual loss in a row and more than the 497 million euros it had reported in February.

The bank, which distributed 546 million euros in bonuses in 2016, also said its cost-cutting plans were hitting roadblocks, partly because of a delay in disposals.

In addition, the lender said it expected higher costs related to Britain’s exit from the European Union – which is expected to lead to hundreds of the bank’s staff moving from London – and a postponement in savings from the merger of its in-house retail bank with Postbank.

The bank’s decision to push ahead with paying big bonuses, despite heavy losses, has tested relations with German politicians and the public, many of whom deeply disapprove of high pay and Anglo-Saxon style capitalism.

Chief Executive John Cryan, who has called for patience in his effort to turn around the bank, defended the bonus payments as an effort to retain staff.

“If we want to live up to our claim of being the leading European bank with a global network, we have to invest in our employees so that we can continue to provide the best solutions for our clients,” he said in a letter to shareholders.

Deutsche sharply cut bonuses for 2016 following speculation that it would need a state bailout to stay afloat.

The logo of Deutsche Bank is seen at its headquarters ahead of the bank’s annual general meeting in Frankfurt, Germany May 18, 2017. REUTERS/Ralph Orlowski

Since then, the bank has executed an overhaul that includes the merger of its in-house retail bank with Postbank and the partial IPO of its asset management unit, which is expected to start trading next week.

In its annual report, the bank said adjusted costs in 2018 were now expected to be 23 billion euros, up from its original forecast for 22 billion, and that some cost savings wouldn’t kick in until 2019.

The bank was cautiously optimistic for this year, saying it expects revenues to rise in 2018 after declining 12 percent in 2017. “We remain committed to our objective of delivering a net profit and a competitive dividend payout for 2018,” Cryan said.

During his tenure, Cryan has stabilized the bank, raised capital, designed an overhaul, cut some costs, confronted daunting legal challenges, and managed the demands of greater regulation.

But the 2017 loss has prompted some investors to question whether Cryan should be given more time to turn around the bank, after less than three years as chief executive.

Investors are also frustrated by paltry dividends, which the bank said would be 11 cents for 2017, resulting in a payout for investors of 230 million euros.

“The stark mismatch between bonuses and dividends must be remedied in the next few years,” said Ingo Speich, a fund manager at Union Investment, which holds Deutsche stock.

Shares in Deutsche Bank were 0.2 percent higher at 1121 GMT, up less than the broader DAX index of major German companies as investors ignored news of the bigger loss.