FRANKFURT (Reuters) – Deutsche Bank (DBKGn.DE) is slashing more than 7,000 jobs to cut costs and restore profitability, while keeping its international reach as its new CEO seeks to reassure investors and clients.

Germany’s biggest bank said global headcount would fall to well below 90,000 from 97,000, with a 25 percent cut in equities sales and trading jobs, which are mainly in New York and London and where it has been losing ground to U.S. rivals.

Deutsche Bank did not give a specific number, but a person with knowledge of the matter told Reuters ahead of the lender’s annual general meeting on Thursday that it was aiming to axe 10,000 positions.

Christian Sewing, who became CEO in an abrupt management reshuffle last month, said the bank was committed to its international presence, fleshing out his plan to scale back its global investment bank and refocus on Europe and its home market after three consecutive years of losses.

“We remain committed to our Corporate & Investment Bank and our international presence – we are unwavering in that,” Sewing said, while acknowledging a “challenging” revenue environment.

Deutsche Bank has already dismissed 600 investment bankers over the past seven weeks and will cut spending by 1 billion euros ($1.17 billion) by the end of 2019 in its investment bank.

“This reduction is already fully underway, and so far, due to the considered way we’ve handled this, we have not seen any meaningful revenue attrition,” Sewing said.

Deutsche Bank has long been a default source of lending and advice for German companies seeking to expand abroad or raise money through the bond or equity markets, a role which has had the tacit backing of successive governments in Berlin.

Sewing said that Deutsche Bank’s position as a competitor to the Wall Street banking heavyweights such as Goldman Sachs, JP Morgan, Morgan Stanley and Bank of America, whose clout has grown in recent years, remained an important focus.

“We are Europe’s alternative in the international financing and capital markets business. However, we must concentrate on what we truly do well,” he said.

Another big European bank, BNP Paribas (BNPP.PA), effectively ruled out any tie-up with the German lender as the French bank’s chief executive told its shareholders that it was not considering big deals.

“In the foreseeable future, the group has no intention to carry out large-sized operations, because it is not possible,” Jean-Laurent Bonnafe said, when asked by an investor at its AGM if BNP was “analysing” Deutsche Bank.

Deutsche Bank has been losing ground to rivals in investment banking in all regions, Thomson Reuters data shows. Its ranking for investment banking fees fell to 10th from 8th in the Americas between 2010 and 2017,to 15th from 6th in Asia-Pacific and to 3rd from 2nd in Europe.

Coalition data shows that in global equities, Deutsche has also lost market share in the cash, derivatives and prime services businesses over the same period. Overall in global equities it ranked between 7th and 9th in 2017 against a ranking of between 4th and 7th in 2010.

The reductions will reduce the investment bank’s leverage exposure by 100 billion euros, or 10 percent, but KBW analysts said the moves were disappointing and its shares closed 4.8 percent lower, marking a nearly 35 percent decline this year.

“We view this as confirmation of our view that drastic but necessary restructuring is impossible at this stage,” KBW wrote. 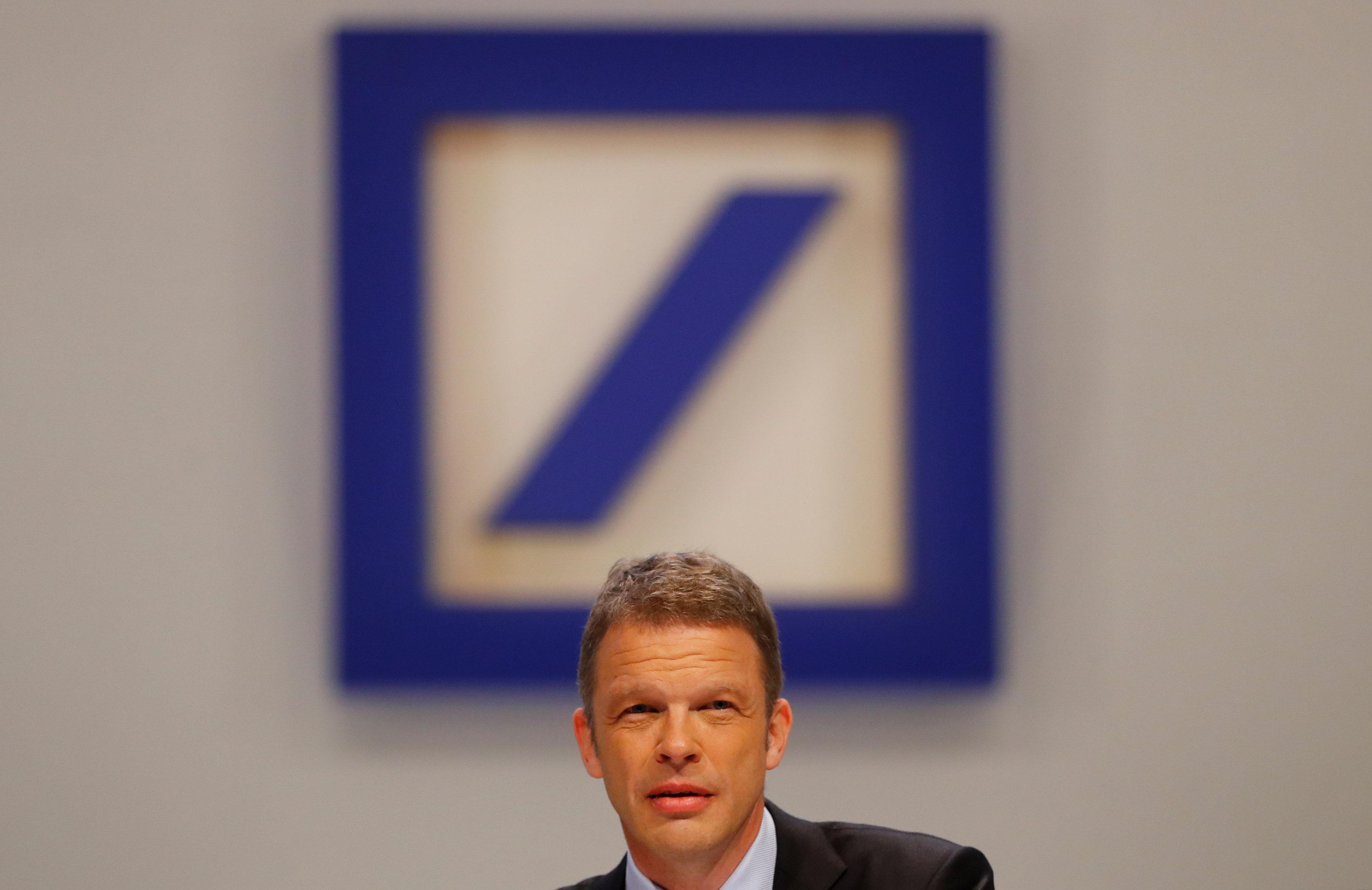 “We remain concerned with their ability to generate free cash flow to support business growth post restructuring,” it said, adding that to achieve its target for a return on tangible equity of 10 percent, Deutsche would need 6 billion euros of profit, something the broker viewed as highly unlikely.

The cuts are merely a first step and further details are needed, Ingo Speich, a fund manager at Union Investment which holds Deutsche Bank shares, said.

“We would have liked to see concrete announcements at today’s shareholder meeting,” he told Reuters. “We need clarity on how the decisions will affect the bottom line.”

Deutsche Bank shareholders, who were fed with Frankfurter sausages and pretzels at the AGM, called on it to speed up the recovery process after months of internal turmoil.

“It is high-time to … end the years-long and still-popular ‘Deutsche Bank bashing’ and get to work finally getting our bank back on its feet after six long years of restructuring,” Klaus Nieding of shareholder lobby group DSW said.

Achleitner defended his decision, adding that U.S. banker John Thain would head a new strategy committee on the supervisory board of the bank, which is also under pressure from credit ratings agencies.

Achleitner survived a motion to remove him from the supervisory board, with only 9 percent of shareholders voting for the measure.

In a separate vote, Achleitner received support from 84.4 percent of shareholders for his actions in 2017, below the rates of well above 90 percent that shareholders typically give executives and board members at AGMs.