KANSAS CITY (Reuters) – An annual U.S. soy exporters’ conference wrapped up on Wednesday without any known sales to Chinese buyers, in sharp contrast to previous years where billions of dollars of the main U.S. cash crop have been signed over to China in elaborate ceremonies.

Members of a Chinese trade delegation look over a soybean plant during a tour of the Kaiser farm near Norborne, Missouri, U.S., August 28, 2018. Picture taken August 28, 2018. REUTERS/Dave Kaup

The U.S.-China trade dispute has effectively halted bilateral trade of soybeans and U.S. farmers are concerned that soy export demand will fall short during their primary shipping season this autumn, when they expect to harvest a record-large crop.

Delegations from other countries including Mexico inked deals for U.S. soybeans, but volumes were smaller than past deals to China.

A delegation of Chinese soybean importers did attend the U.S. Soybean Export Council’s (USSEC) annual Global Trade Exchange conference in Kansas City, however. They toured a Missouri farm on Tuesday, climbing aboard a John Deere combine before loading into a bus to eye nearly ripe soy plants.

The delegation, which includes many of China’s top soybean processors including COFCO and Yihai Kerry, as well as Chinese representatives of U.S. companies Cargill Inc [CARG.UL] and Bunge Ltd (BG.N), met with U.S. farmers, industry representatives and traders.

Top importer China bought more than $12 billion in U.S. soybeans last year, about 60 percent of U.S. soybean exports, but has been mostly out of the market since Beijing imposed a 25 percent tariff on all U.S. shipments on July 6 in retaliation for U.S. tariffs on Chinese goods.

Soybeans are the greatest agricultural casualty so far of the dispute between the world’s two largest economies. 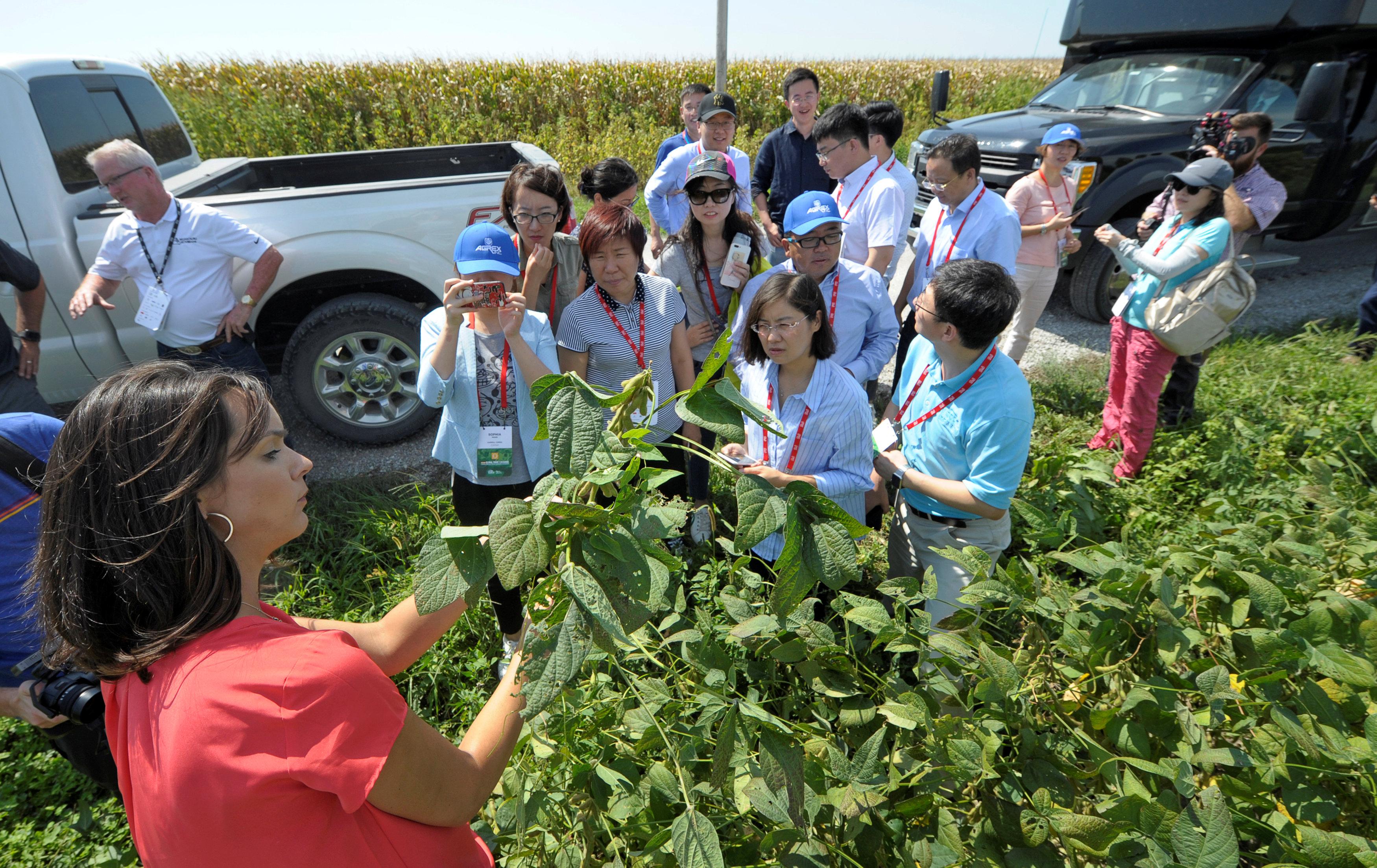 Mu Yan Kui, COO of Yihai Kerry, said China’s 2018/19 season soybean imports from all origins could tumble to 86 million tonnes, from 96 million in the current season, if the trade war persists. Hog and poultry feeders can drastically cut their demand for U.S. soy by tapping government stocks, scaling back soymeal use in rations and using alternative feeds like sunflower or rapeseed meal.

“If the trade conflict cannot be solved quickly and effectively, it will definitely reshape the global market,” he told conference attendees on Wednesday.

Still, U.S. exporters said they were not willing to walk away from hard-won business, after investing between $120 million and $130 million in Chinese market development over the past 36 years.

“We made a conscious decision not to suspend our programs in China so we are continuing to operate our promotional and educational programs there. Part of that is bringing a delegation here,” Jim Sutter, USSEC’s chief executive officer, said in an interview at the Missouri farm on Tuesday.

U.S. soybean prices Sv1 have tumbled about 18 percent over the past three months as the threat of tariffs shifted Chinese buyers to book soybeans almost exclusively from Brazil, the top exporter of the oilseed.

The industries in the United States and China have hosted purchase-agreement signing events up to three times a year in recent years, but have not done so since a ceremony last November in Beijing, said Xiaoping Zhang, USSEC’s director for China.

An event in July 2017 in the United States resulted in 12.5 million tonnes in purchase agreements, the second-largest one-off deal for U.S. soybeans ever.

Members of the Chinese delegation said though business was complicated by the tariffs, they had exchanged market views with their U.S. counterparts.

“Maybe in the near future we can finalize the business,” said a Chinese buyer for a top-five crusher in the country.

“We can cover our demand until November. But for December and January, we are a little short of beans,” he said, declining to be identified by name. China’s total U.S. purchases in December and January should total at least 13 million tonnes, he said.

Another delegation member from a top-ten crusher in China said that Chinese buyers may return to the U.S. market as Brazilian supplies run low and prices there rise in response.

That, said the soy buyer, may already be starting to happen.

“Since last Friday, the (South American) sales basis is starting to rally by around 20 cents per bushel. That means commercial stocks are getting tighter,” said the trader, who also declined to be identified.

Still, the two sides remained locked in the standoff.

“We clearly have differences … We want to come to terms with China, terms that are fair and reciprocal,” Ken Isley, administrator of the U.S. Agriculture Department’s Foreign Agricultural Service, told conference attendees on Wednesday.

“Stay tuned. I’m optimistic. It may take a while,” he said.

“When the trade war is concluded, we want to be able to jump right back in and be doing business again.”