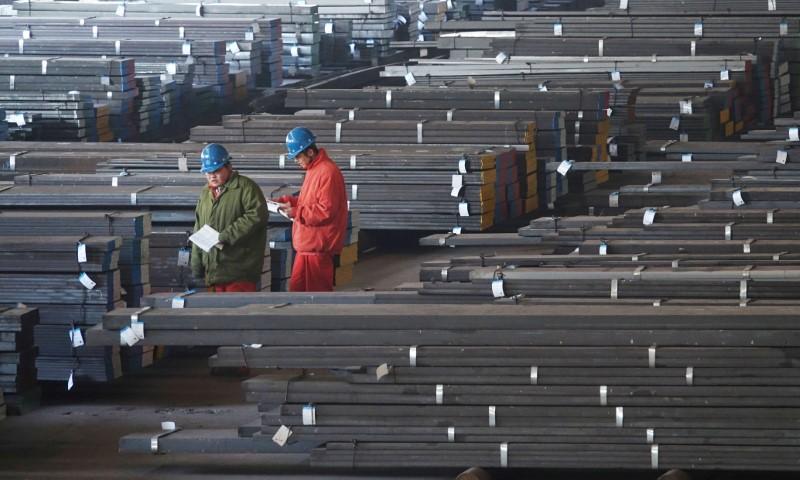 BEIJING (Reuters) – Chinese exports of steel products may continue to fall this year due to strong domestic demand and reductions in capacity due to environmental commitments, the chairman of state-owned mill Fujian Sangang Group Co Ltd said.

The prediction follows a 30.5 percent plunge in Chinese steel exports last year to 75.43 million tonnes, as strong domestic prices and high profits at home led to a drop in shipments abroad.

The supply and demand trends are now more in line following the supply-side reforms “while most of the downstream sectors have shown signs of recovery”, Li Lizhang told Reuters on the sidelines of China’s annual parliament session on Saturday.

Demand from property, infrastructure, manufacturing and shipbuilding sectors will increase, he said, while steel supply would also see small pick-up this year compared to 2017.

Cities across the country are carrying out stringent measures to lower fine particulate matter (PM2.5) readings. The steelmaking hub of Tangshan in Hebei province said it will extend production restrictions for another eight months after current curbs expire next week.

Li said production curbs would not be limited to the smog-prone region of Beijing-Tianjin-Hebei: “Other regions will also see restrictions if pollution levels exceed the limits.”

Despite this, steel prices would not see a big fluctuation, he said, as steel mills have already prepared for “the new normal”.

Fujian Sangang, the biggest producer in southeastern China, has a total capacity of 11 million tonnes. It produced 11.19 million tonnes of steel products last year, and plans to produce 10.8 million tonnes in 2018.