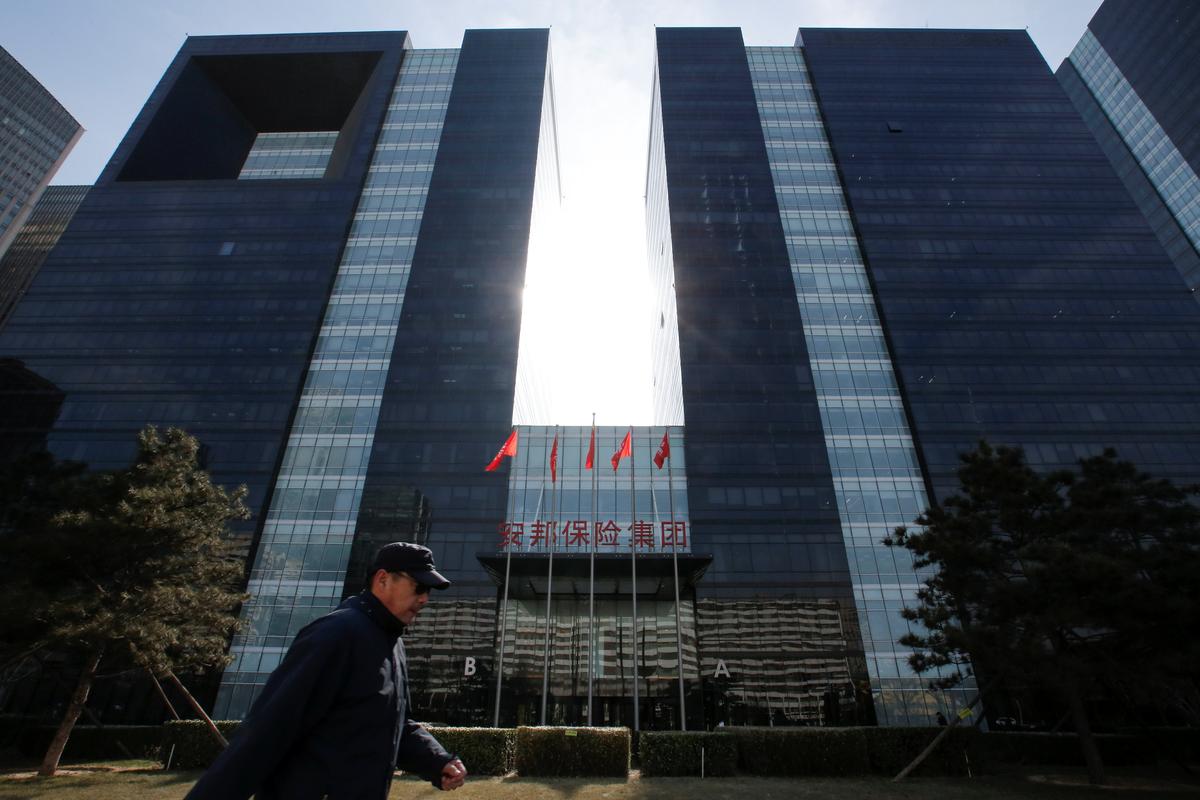 BEIJING/SHANGHAI (Reuters) – The Chinese government on Friday seized control of Anbang Insurance Group Co Ltd and said its chairman had been prosecuted, a dramatic move that highlights Beijing’s willingness to curtail big-spending conglomerates as it cracks down on financial risk.

Anbang had violated laws and regulations which “may seriously endanger the solvency of the company”, the China Insurance Regulatory Commission (CIRC) said in a statement announcing the seizure, without giving details.

The CIRC also said Anbang’s chairman and key shareholder, Wu Xiaohui, had been prosecuted for economic crimes. Wu was arrested in June as troubles mounted for one of China’s most aggressive buyers of overseas assets.

The Shanghai prosecutors office said in a statement Friday that Wu had recently been charged with fundraising fraud and abuse of his position, and that his case had been forwarded to the city’s intermediate court for prosecution.

During the government takeover of Anbang Group, which will last for one year starting on Friday, the company will be managed by a group of officials from the CIRC, the central bank and other key financial regulators and government bodies.

The group will seek to undertake an equity restructuring of the insurance giant, even as it keeps Anbang operating as usual, protecting the rights and interests of its consumers and stakeholders, the CIRC said.

The government takeover of Anbang, which claims 1.97 trillion yuan ($310.85 billion) in assets and ranks 139 on the Global Fortune 500 list, is a defining blow to the acquisitive conglomerate best known for acquiring New York’s landmark Waldorf Astoria hotel.

The unprecedented seizure of a major non-state company also underscores how far the ruling Communist Party will go in its growing campaign to lower financial risks, sending a signal to risk-taking private enterprises.

It was not immediately clear what triggered the move.

Three insurance industry insiders said they were not surprised by the move since Anbang had been in the crosshairs of the government. But they said they believed it had more to do with Anbang’s behavior than systemic financial risks.

A regulatory source with knowledge of the matter said the government had been effectively running the company since Wu was detained and the timing of the official takeover was linked to the months-long investigation into Wu, which was nearly complete.

But a Beijing-based lawyer who works with the CIRC and other regulators said senior officials at the insurance regulator had been watching Anbang closely since last year as its liabilities from the sale of shadow banking products grew, raising questions about the company’s solvency.

“The group has become too big to fail in some sense,” said the lawyer, who declined to be identified by name.

The CIRC said on Friday that it had sent a working group to Anbang in June 2017 and that at present the company’s operations are “generally stable”.

“This appears to be an unprecedented takeover – a Chinese-style hostile takeover,” said Scott Kennedy, director of the Project on Chinese Business & Political Economy at the Center for Strategic and International Studies in Washington.

“The Chinese government doesn’t want to have a company default on foreign debt and it also wants to teach a lesson to other Chinese business people that the Party is in charge.”

After a spate of high-profile deals worth over $30 billion, Anbang began to run into roadblocks even before Wu’s detention, failing to close on a handful of investments and facing criticism over its opaque shareholding structure.

A spokesman for Anbang Insurance Group declined to comment and referred to the CIRC announcement.

Calls to Wu Xiaohui’s personal phone numbers were either disconnected or unanswered.

“Clearly a message is being fed back into the market and to private companies that being very innovative may not be looked on favorably in the long run,” said Keith Pogson, senior partner for Asia-Pacific financial services at EY.

“This says to the market ‘tread carefully’ – if they hadn’t already got that message.”

In a separate statement Friday, CIRC said insurers must take steps to handle fraud risks and that it had issued new guidelines for the industry. The regulator said it would seek to improve coordination among relevant authorities to prevent and mitigate fraud risks.

The CIRC said that Anbang’s debts and obligations will not be impacted by the takeover.

The takeover was implemented under a broad provision in the country’s insurance law allowing it to rectify violations of the law by insurance companies, it said.

The noose had been tightening around Anbang as China’s insurance industry came under the microscope over the past year or so for risky behavior, ranging from term-mismatches on insurance products and highly leveraged overseas acquisitions, as well as corrupt practices.

Anbang distributes insurance through multiple channels, with the bulk going through banks.

Under Wu, Anbang was among China’s most active overseas investors after the government liberalized offshore investment rules earlier this decade.

In the United States, Anbang bought the Waldorf Astoria for $1.95 billion, and later agreed to pay $6.5 billion for Strategic Hotels and Resorts, purchasing both properties from Blackstone Group.

It acquired life insurance companies in South Korea and in Europe, as well as the largest retirement home chain in British Columbia, Canada.

But it has faced increasing pushback in its offshore deal-making amid a broader decline in Chinese outbound acquisitions. Beijing has strengthened curbs over capital outflows after China’s leadership vowed to curb risk in its financial system.