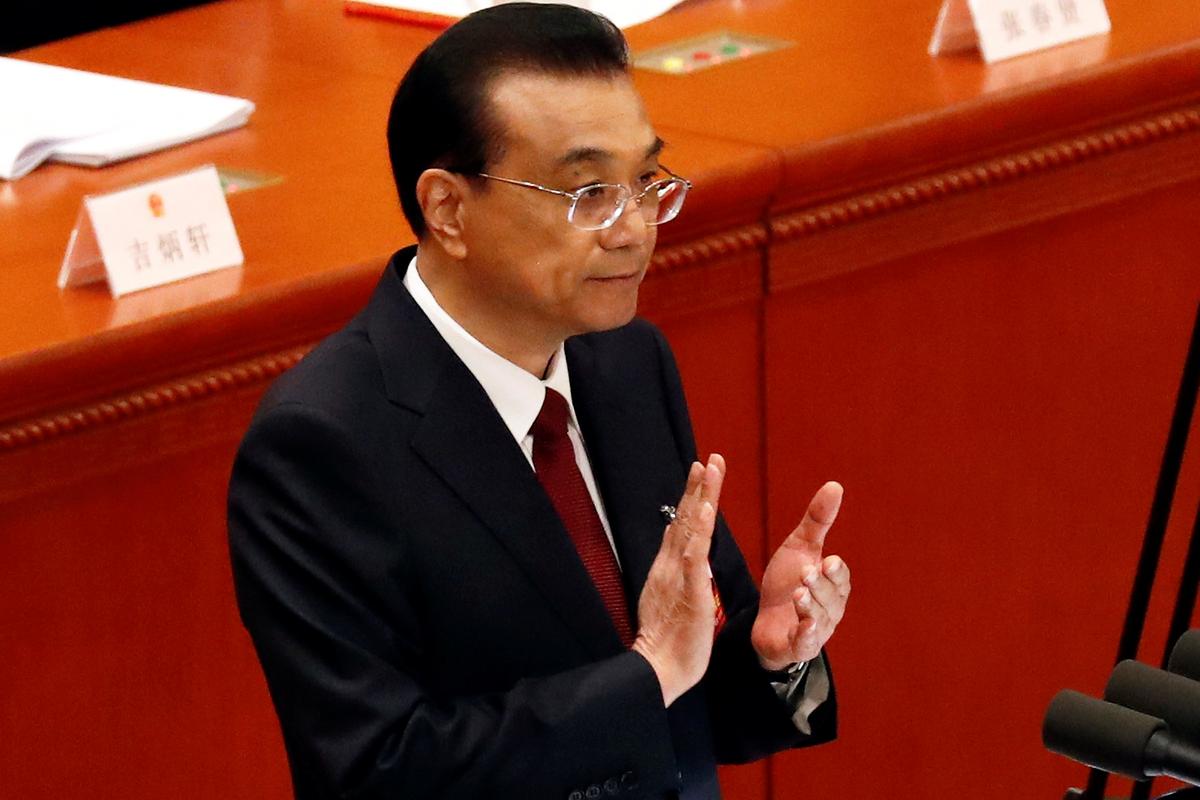 BEIJING (Reuters) – China aims to expand its economy by around 6.5 percent this year, the same as in 2017, while pressing ahead with its campaign to reduce risks in the financial system, Premier Li Keqiang said Monday.

Chinese Premier Li Keqiang claps hands as he delivers his speech during the opening session of the National People’s Congress (NPC) at the Great Hall of the People in Beijing, China March 5, 2018. REUTERS/Damir Sagolj

The goal was kept unchanged even though the economy grew 6.9 percent last year and exceeded the government’s target. Sources previously told Reuters that China will maintain its growth target at“around 6.5 percent”.

Economists had already expected the world’s second-largest economy to lose some momentum this year as the government deepens its push to contain a build-up in corporate debt, while a war on pollution and a cooling property market weigh on its manufacturers.

In his annual work report, Li also said China has cut its budget deficit target for the first time since 2012, suggesting Beijing will be more watchful of fiscal spending while not tapping the brakes so hard that it risks a sharper slowdown.

“Policy wise, the report definitely has a tightening bias,” said Betty Wang, senior China economist at ANZ in Hong Kong.“In line with expectations, the government is pushing through their reform agenda.”

But last week’s escalation in trade tensions with the United States has jumped to the top of the list of uncertainties facing China this year.

Li said China opposes protectionism and supports the settlement of trade disputes through negotiation, but will“resolutely safeguard” its legitimate rights and interest.

Yet, China will keep its yuan currency basically stable, Li said in remarks to the opening of the annual meeting of parliament.

He said a steady rise in import and export volumes can be expected this year, a view unchanged from a year ago. No export target was given for the third straight year.

“We can expect continued recovery of the global economy, but there are also many factors that bring instability and uncertainty,” the premier said.

“The policy changes of the major economies and their spillover effects create uncertainty; protectionism is mounting, and geopolitical risks are on the ascent,” Li said.

China’s economic and financial risks“are generally under control” but more needs to be done to resolve issues such as local government debt, Li said. He also said China will improve supervision over shadow banking, internet finance and financial holding companies, and step up risk controls at financial institutions.

Li said China has cut its budget deficit target to 2.6 percent of GDP from 3 percent in 2017. Most analysts had expected it to be maintained or trimmed only slightly.

However, since the economy has been expanding at such a strong pace, analysts said the cut was again more symbolic of Beijing’s intention to further control debt growth.

“The actual figure is even lower than we expected…a 2.6 percent deficit would be about 2.3 trillion yuan ($363.5 billion) in absolute terms, which equals to the 2016 level,” said ANZ’s Wang.“It shows the government’s determination to control leverage in the economy.”

Chinese Premier Li Keqiang takes his seat after delivering the speech during the opening session of the National People’s Congress (NPC) at the Great Hall of the People in Beijing, China March 5, 2018. REUTERS/Damir Sagolj

Heavy government infrastructure spending was a major driver behind China’s forecast-beating growth last year, but Beijing has been cracking down recently on some projects launched by local governments as it seeks to curb their spending.

Despite the lower deficit ratio, the absolute amount of the deficit is expected to remain unchanged at 2.38 trillion yuan ($376 billion), according to the finance ministry’s annual budget report.

Li also reiterated that China will keep its monetary policy“prudent” and“neutral”, neither too loose nor too tight, and will maintain reasonably steady liquidity, he said.

While the central bank has been gingerly raising money market rates to discourage riskier lending practices, it has also kept markets well supplied with funds when there are worries of a deeper cash squeeze, and bank lending hit a fresh record last year.

A member of the security personnel keeps watch at the end of the opening session of the National People’s Congress (NPC) at the Great Hall of the People in Beijing, China March 5, 2018. REUTERS/Thomas Peter

The National Development and Reform Commission, the state planner, said separately that outstanding total social financing (TSF) and M2 will grow at a similar pace this year as in 2017.

TSF grew 12 percent last year, in line with the target, but M2 growth slowed to 8.2 percent, below the goal of around 12 percent. ANZ had expected both targets to be set at 10 percent or lower this year.

“If I remember it right, it’s the first time that they don’t have a specific target in two decades. It shows authorities now prefer a tighter stance on monetary policy,” Wang said.

“Overall both monetary and fiscal policy will be tighter than last year, because the government wants to control financial leverage and overall debt levels.”

Stability will be the watchword this year as President Xi Jinping pursues his vision of turning China into a“modestly prosperous” nation by 2020.

To hit the 2020 goal, the economy needs to expand at least 6.3 annually over the next three years, officials have said.

Xi also wants China to become a“strong power” on the world stage by 2050.

The ruling Communist Party last month set the stage for Xi to stay in office indefinitely, with a proposal to remove term limits from the constitution.

Key Xi ally, former top graft buster Wang Qishan, sat on the same row as Standing Committee members on the front stage of the Great Hall, despite having stepped down from the elite seven-man body which runs China in October. He is expected to become vice president, with a specific role dealing with the Trump administration.