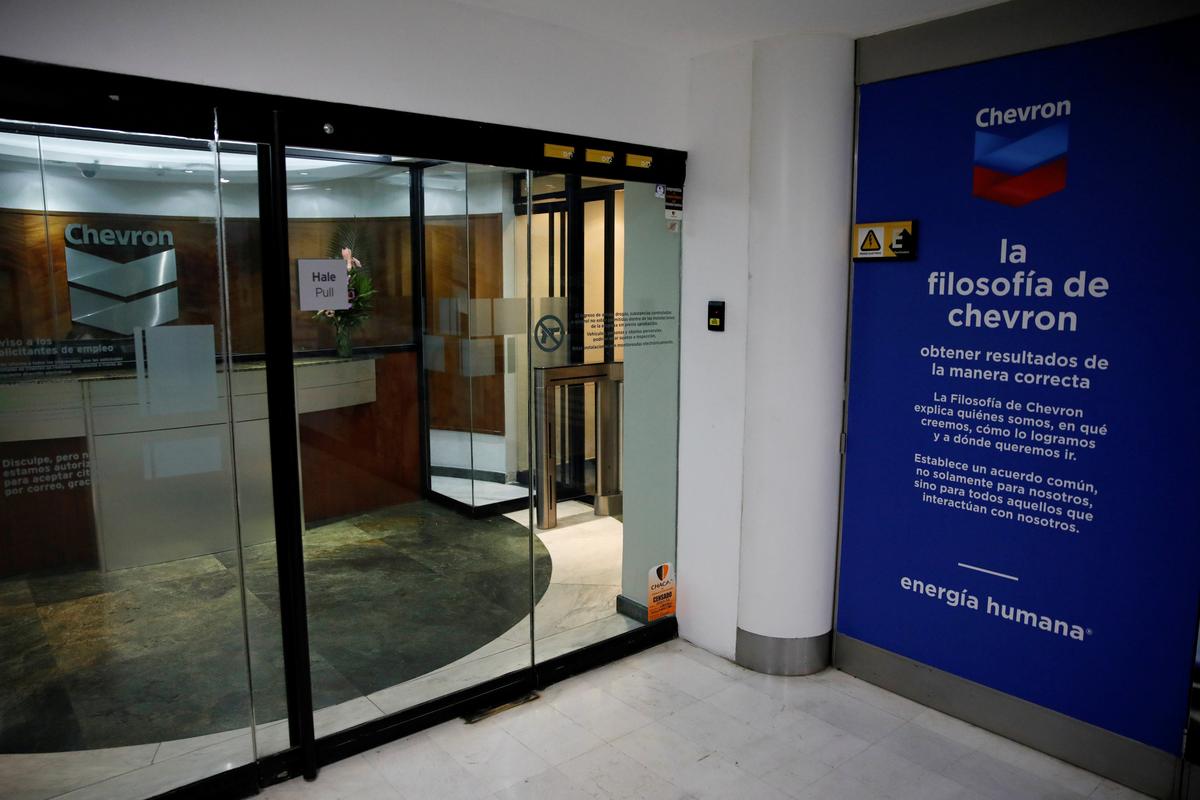 (Reuters) – U.S. oil major Chevron Corp (CVX.N) has evacuated executives from Venezuela after two of its workers were imprisoned over a contract dispute with state-owned oil company PDVSA, according to four sources familiar with the matter.

FILE PHOTO: The logo of Chevron is seen in their office in Caracas, Venezuela, April 18, 2018. REUTERS/Carlos Garcia Rawlins/File Photo

Chevron asked other employees to avoid the facilities of its joint venture with the OPEC nation’s oil firm, the sources said.

The arrests, in a raid by national intelligence officers, were the first at a foreign oil firm since Venezuela’s government launched a purge last fall that has resulted in detentions of more than 80 executives at PDVSA and business partners.

The Chevron workers may face charges of treason for refusing to sign a supply contract for furnace parts drawn up by PDVSA executives, Reuters reported earlier this week. The workers balked at the high costs of the parts and a lack of competitive bids.

Chevron’s move to evacuate its expatriate workforce underscores the how arduous it has become for foreign oil firms and their workers to sustain operations through Venezuela’s accelerating political and economic meltdown.

The affected staff numbers about 30 people in the coastal city of Puerto la Cruz, although it is unclear how many people Chevron has already removed from the country.

Asked about the departures, Chevron on Tuesday declined to comment on what it called “personnel matters.” Last week, the company said it was working for the release of the detained workers, Carlos Algarra and Rene Vasquez, who are represented by Chevron lawyers.

Neither PDVSA nor the government’s Information Ministry responded to requests for comment. The public prosecutor’s office, which has not publicly announced any charges against the Chevron employees, did not immediately respond to a request for comment.

Chevron has no plans to exit the country, according to a company employee familiar with the thinking of its board of directors. The oil company has not pulled out of other tough environments in the past, the person said – citing the jailing of employees in Indonesia in 2013 – and the firm believes Venezuela will eventually stabilize.

Chevron, the world’s seventh-largest publicly traded oil producer with 2017 revenue of $135 billion, operates in Venezuela mostly through minority stakes in five projects across the OPEC-member nation.

The firm has about 150 employees in its Puerto la Cruz headquarters and has two more offices in the country. Its earnings from Venezuela dropped 18 percent last year, to $329 million, according to regulatory filings.

The arrests mark an escalation of tensions between PDVSA and foreign companies over control of supply contracts and the joint ventures’ governance, sources familiar with the dispute told Reuters.

Outside firms say they are increasingly faced with impossible dilemmas. If their executives sign contracts without following their companies’ due process rules, they run the risk of violating compliance standards meant to control costs and guard against corruption. If they don’t sign, they stoke tension with their partners at PDVSA, which has a controlling interest in all joint ventures.

Companies evaluating an exit from Venezuela have limited options because few if any international firms would pay anything close to full value for assets in the country amid the ongoing turmoil, according to interviews with three executives of oil firms that have operated in Venezuela. But continuing operations often means stomaching steep losses, taking massive write-downs – and, now, the threat of having staff arrested by the embattled socialist government of President Nicolas Maduro.

PDVSA’s deteriorating infrastructure and cash flow have caused oil production to plunge 33 percent in a year, to 1.51 million barrels per day (bpd) in March, according to official data reported to OPEC. Venezuela’s oil output so far this year is at a 33-year low.

The falling production and arrests of PDVSA executives on allegations of corruption picked up speed late last year after Maduro named a military chief with no oil industry experience, Major General Manuel Quevedo, as the nation’s oil minister and president of PDVSA.

Several of Chevron’s foreign staff and some local executives and their families left Venezuela starting last week after the arrests, the four sources familiar with their departures told Reuters. They described the situation as temporary, and said executives may return if proposed talks between Chevron and PDVSA to resolve the dispute are successful.

The logo of Chevron is seen in their office in Caracas, Venezuela April 18, 2018. REUTERS/Carlos Garcia Rawlins

Chevron executives have had high-level meetings with Venezuelan government officials this week, said two of the people familiar with the matter.

Chevron and other firms aim to avoid a repeat of what happened to Exxon Mobil Corp (XOM.N) and ConocoPhillips (COP.N) in Venezuela in 2007, when the government of then-President Hugo Chavez expropriated their assets after they could not reach an agreement to convert their projects into PDVSA-controlled joint ventures.

“No company can leave because it would lose the assets,” said a former negotiator of Exxon’s 2007 exit from Venezuela. “At this point, there are just a few options.”

Chevron employees remaining in Venezuela are concerned they may be vulnerable to detention following the departure of senior management, according to interviews with employees and family members.

The logo of Chevron is seen in their office in Caracas, Venezuela April 18, 2018. REUTERS/Carlos Garcia Rawlins

The arrested Chevron workers oversaw operations and procurement at Petropiar, an oil production and processing project co-owned by PDVSA and Chevron.

Chevron has asked employees assigned to Petropiar to temporarily work from the firm’s Puerto la Cruz office rather than show up at its partner’s oil production and processing facilities, according to one person familiar with the situation.

The two men had refused to sign a multi-million dollar contract under an emergency decree to buy imported parts required by Petropiar, according to six sources with knowledge of the contract dispute. Such decrees, which skip competitive bidding, have been cited by Venezuelan and U.S. prosecutors as a means of extracting bribes in some recent corruption cases.

Algarra and Vasquez are now being held in a detention center in Barcelona run by Venezuela’s intelligence unit, known as Sebin. Coworkers and relatives have brought them food to supplement what they are provided, a person familiar with the matter said.

Several other foreign energy companies have written down the value of their Venezuela assets by hundreds of millions of dollars or halted most operations, keeping only a skeletal staff in the country.

Spain’s Repsol (REP.MC) took a pre-tax charge of about $1 billion on its Venezuelan assets in the prior quarter. Italy’s ENI said it was owed 500 million euros ($615 million) in delinquent payments from PDVSA last year.

Service provider Schlumberger (SLB.N) wrote down its Venezuelan holdings in the fourth quarter by $938 million. Halliburton (HAL.N) earlier this month said it wrote off all remaining assets in the country, adding a $312 million charge on top of $647 million in charges last year.

“I can tell you it is difficult for our people because of lack of power, lack of water,” said Chief Executive Patrick Pouyanne last week at an oil summit in Paris.

The company would maintain a presence there, however, on the hope the crisis would ease.

“It is important to stay in a country even in difficult times,” Pouyanne said, “because people will remember it.”