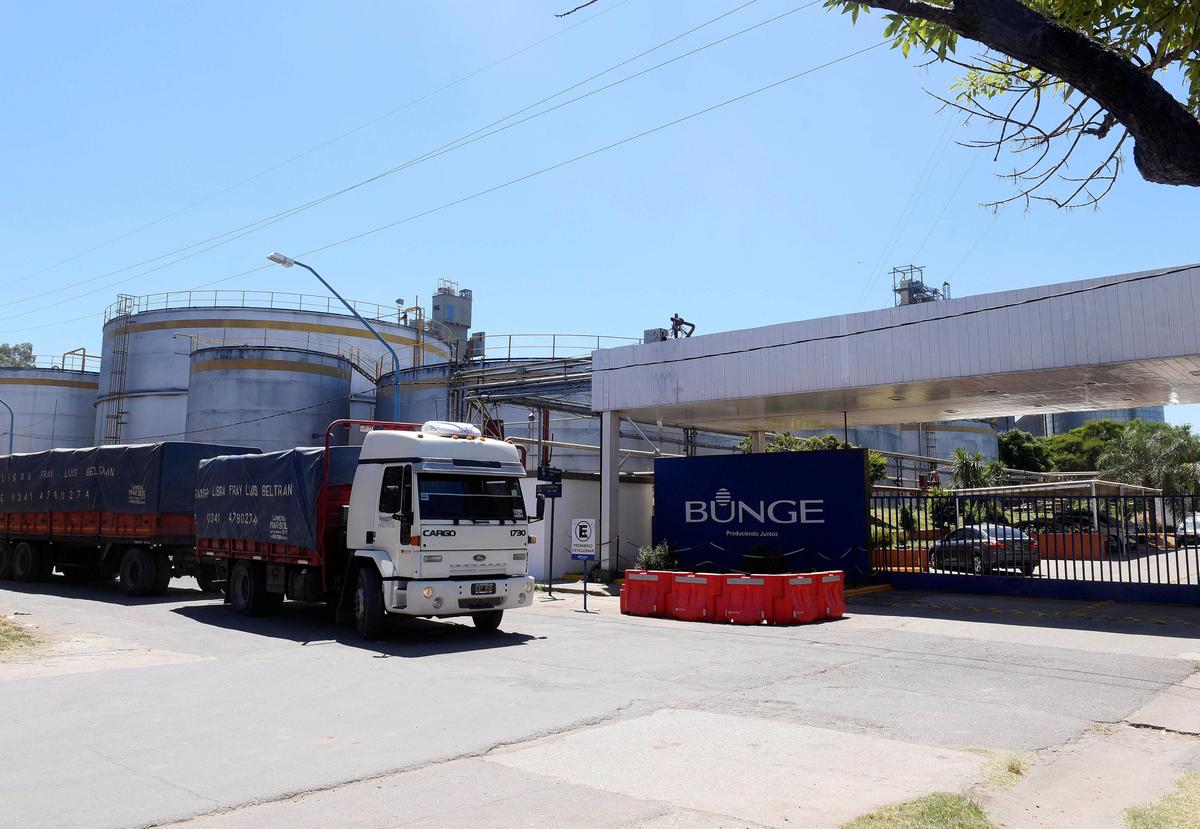 ROSARIO, Argentina/CHICAGO (Reuters) – On the banks of the Parana River, machines hum 24 hours a day in Argentina’s grain ports, churning out soy-based animal feed and shooting it straight into the hulls of ships bound for buyers worldwide.

The wind stirs up fine meal dust, creating a protein-filled haze. Rosario is the biggest soy-crushing hub in the Americas, where 22 plants process 157,500 tonnes of soybeans per day into soyoil and feed that fattens livestock in markets from the United Kingdom to Indonesia.

These plants are a key reason why top U.S. grains merchant Archer Daniels Midland Co (ADM.N) is attempting a takeover of longtime rival and soy-crushing powerhouse Bunge Ltd (BG.N), industry executives, analysts and grains trading sources told Reuters. The deal, estimated at $16 billion, would be the biggest ever by one of the world’s four agricultural trading giants.

ADM and Bunge are the “A” and “B” of the so-called “ABCD” group of firms that dominate global grains trading, along with Cargill and Dreyfus.

ADM’s advance on the financially faltering Bunge reflects larger profit pressures across the grains sector amid a global glut now entering its fifth year, holding commodity prices at sustained multi-year lows. Such conditions are widely expected to drive a wave of consolidation among agricultural firms.

ADM is the only one of the ABCDs that has no crushing capacity in Argentina, where Bunge has four plants.

“Where is the value in Bunge from ADM’s point of view? It is in South America, including crushing and elevator capacity in Argentina,” said a Buenos Aires market source with knowledge of the situation.

ADM would also take on Bunge assets in Brazil, which include factories, mills, silos, distribution centers and port terminals. Bunge is bigger than ADM in Brazil as well as in Argentina.

Juan Luciano, the Argentina-born CEO of U.S.-based ADM, told investors this month that ADM aims “to plug holes in our value chain”, although he made no reference to reports the firm has approached Bunge.

“The hole in their value chain is called Argentina, because ADM hasn’t any crushing facilities here,” said Buenos Aires-based August Remijsen, former Southern Cone chief executive of trading group Toepfer, which was recently absorbed by ADM. “The most efficient crushers in the world are located in Argentina.”

Representatives of ADM and Bunge declined to comment on the reported merger talks. Bunge last year turned down overtures from Switzerland-based Glencore (GLEN.L).

Argentina is the world’s top exporter of soymeal and soyoil, used for cooking and making biodiesel. Most is shipped from Rosario, located in the Pampas farm belt.

The nation’s massive soy crushers and grains elevators are right next to the deeply dredged Parana. The set-up offers logistical advantages over the United States and Brazil, where moving grains involves more costly ground transportation and loading products on and off barges.

Bunge, founded in 1818 in the Netherlands, is the world’s top industrial producer of soymeal and soyoil. But a series of quarterly losses have made the storied firm vulnerable to a takeover, analysts said.

“It’s the inexorable path ahead, because it would be hard for Bunge to reverse a full year of losses,” said Pablo Adreani, head of Argentine farm industry consultancy Agripac.

About 60 percent of Argentine soyoil went to India and Bangladesh last year, emerging markets where ADM is keen to increase access. Soymeal was destined mainly for Vietnam, Indonesia, the United Kingdom and Italy.

ADM exported 9.1 percent of the overall 47.9 million tonnes of raw grains shipped from Argentina in 2017, close to Bunge’s 9.7 percent. A combination of the two firms would be Argentina’s No. 1 raw grains exporter, a title currently held by COFCO-Nidera, which combined early last year to capture 17 percent of the market.

Under this scenario, Dreyfus would be left in the dust with 9.5 percent of the 2017 raw grains export market.

But the ADM-Bunge tie-up could face regulatory scrutiny in the United States, where ADM is already the largest grain merchant. The biggest overlap between ADM and Bunge in the United States is in grain origination and oilseeds processing, and regulators could force ADM to divest substantial assets as a condition of approval, according to antitrust experts.

The firms would have to overcome opposition from U.S. farmers who fear that giving more market share to ADM could hurt wheat, corn and soybean prices, said Peter Carstensen, who teaches antitrust law at the University of Wisconsin Law School.

The deal could also face opposition from farmer groups in key agricultural markets, including the European Union, China, India and Brazil, he said.

Regulators in Argentina would also have to approve any deal. A spokesman for the country’s regulators declined to comment on the matter.

Ocean-going vessels can reach the crushing plants that dot the banks of the Parana because the river is dredged to a depth of at least 34 feet from the port of Timbues, just north of Rosario, to Buenos Aires, 287 miles (462 km) to the south.

Bunge can process 18,000 tonnes of soybeans at its Rosario area facilities every day, according to the local grains exchange. At the current export price, that means Bunge can crush $7.3 million worth of soybeans in 24 hours.

Despite the industry’s sustained bout with oversupply and low prices, the soymeal business has room to grow, said Adreani, the farm analyst. That’s because a growing world population – now approaching eight billion – will continue to drive demand for meal-fed beef and pork, he said.

“ADM is looking at the advantage it would have over the 15 or 20 years ahead,” Adreani said. “It’s a smart strategy.”