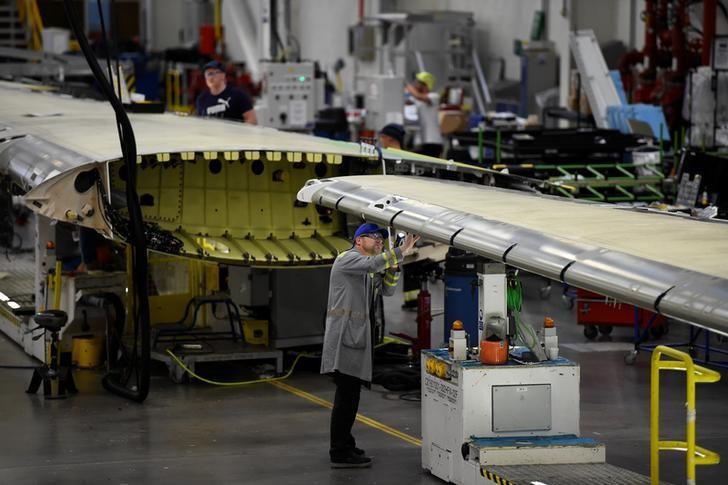 (Reuters) – Britain has thrown financial support for the first time behind exports of Bombardier (BBDb.TO) CSeries jets part-built by Northern Ireland workers caught up in a recent trade row.

The move comes weeks after Bombardier won a shock reprieve from severe U.S. import duties on the 110-130-seat CSeries when a U.S. tribunal ruled Boeing had failed to prove it had been harmed by low prices of CSeries sold to Delta Air Lines.

The Boeing-Bombardier dispute raised questions over jobs at Northern Ireland’s largest industrial plant and drew warnings to Boeing over its UK ties from Prime Minister Theresa May, who depends on a Northern Ireland party for her majority.

Although Bombardier receives some UK development funding, UKEF had long resisted Canadian requests to finance CSeries exports that partly compete with those of Airbus (AIR.PA), the European plane giant which employs 12,000 people in the UK.

The decision to provide support reflects a power shift in the aerospace industry after Airbus agreed to buy a majority of the struggling CSeries last year, and is viewed by some experts as a reminder of ongoing UK interest in the CSeries’ future.

“It is a small amount of money but a signal to Boeing,” a European trade source said, asking not to be identified.

For its part, Boeing has signaled it would sue Bombardier again if provoked to do by what it regards as unfair pricing of CSeries jets. But there are signs it is trying to defuse the row as it highlights investments in Canada and Britain.

However, trade analysts say an appeal looks increasingly unlikely, ahead of a March 12 deadline, as Boeing seeks to smooth over a row which soured relations with Canada and Britain and resulted in the loss of a Boeing fighter sale to Canada.

“We are very mindful of the relationships that we have in Canada and … we do about $4 billion of supply chain work in Canada every year,” Muilenburg told Reuters.

“But we also want to make sure that we continue to set a standard for a fair playing field and that we all play by the same rules, and that will be our consistent theme.”

Other potential obstacles to UK CSeries aid were lifted when UKEF eased a two-year ban on Airbus funding, resulting from misleading bids that triggered an Anglo-French corruption probe.

Airbus said last month it had reached agreement allowing the funding to resume on a case-by-case basis.

Korean Air took delivery of its first CSeries in December, becoming the first Asian operator. Its order for 10 jets, with options for at least another 10, suggests the main beneficiary of UKEF support will be Airbus rather than Bombardier. The Airbus CSeries tie-up is expected to be approved in a matter of months.

Last July, Boeing itself became an indirect recipient of UK export support when UKEF said it was backing two Boeing 787s to Poland’s LOT Airlines. However, the aid is tied mainly to Rolls-Royce (RR.L) engines rather than the airframes.