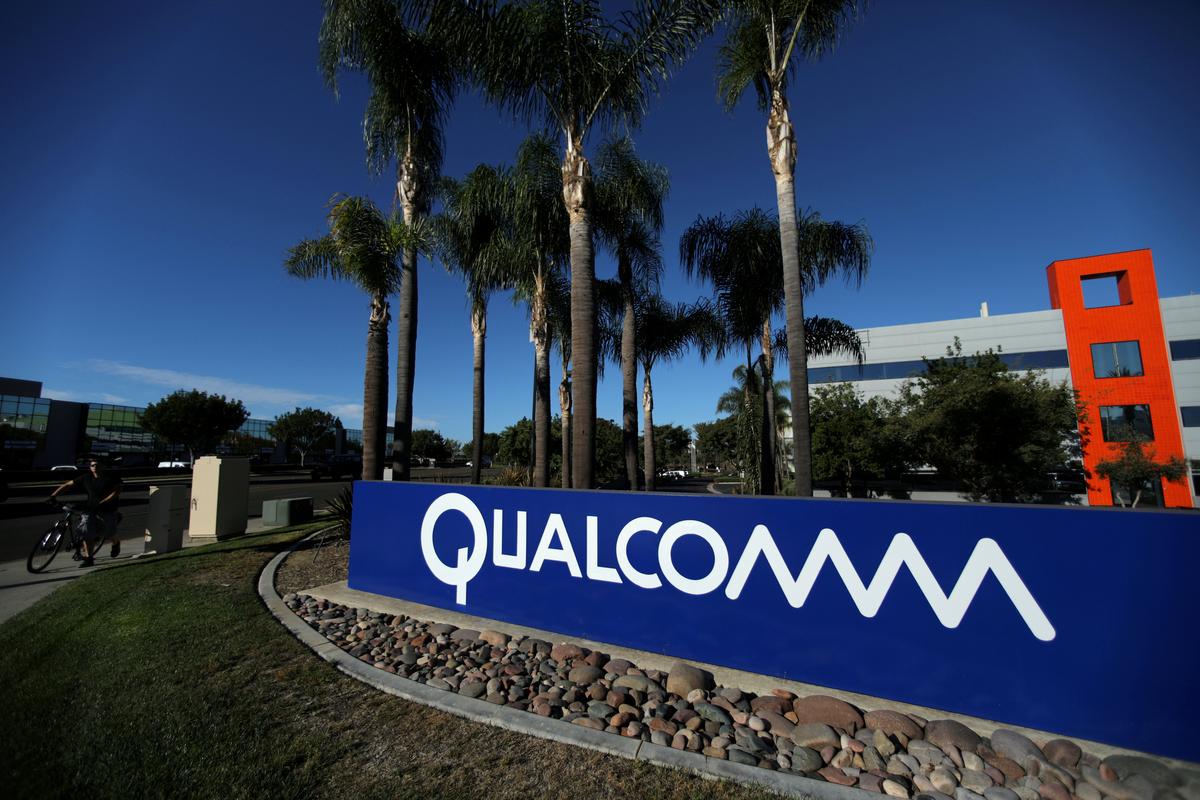 SHANGHAI (Reuters) – U.S. chipmaker Qualcomm Inc (QCOM.O), blocked this week from a takeover bid amid national security fears, was already walking a Pacific tightrope: it has government and defense contracts in America, but two-thirds of its revenue comes from China.

U.S. President Donald Trump on Monday halted microchip maker Broadcom Ltd’s (AVGO.O) $117 billion takeover of Qualcomm over concerns it would give China the upper hand in the next generation of mobile communications, forcing the Singapore-based firm to drop its bid.

The move illustrated the awkward position of Qualcomm, which is based in San Diego. In the United States, it has government and defense contracts and is seen as a “trusted” supplier. In China, it has its most lucrative market, thanks to patent licensing fees it receives there from smartphone vendors including Apple Inc (AAPL.O), Samsung (005930.KS) and Xiaomi.

On top of that, China, the United States and Europe are racing to develop the next generation of wireless data network, called 5G, for mobile phones and increasingly connected devices. Whoever controls the technology will gain a potential strategic advantage, and the U.S. government does not want to have to rely on Chinese-made gear.

The result is a delicate balancing act to navigate trade disputes and political tensions between Beijing and Washington that could irk policymakers and regulators on both sides, hurting business and deals.

“We see ourselves as part of the China semiconductor system,” Cristiano Amon, Qualcomm President told Reuters at a Beijing event in January. “It’s very clear that 5G is important to the United States of America. It’s important for China.”

Qualcomm is still waiting for Chinese approval of its proposed $44 billion acquisition of NXP Semiconductors NV (NXPI.O) and trying to mend its relationship with Chinese customers after paying a fine of nearly $1 billion for anti-competitive practices in 2015.

The company is helping Chinese firms ZTE and China Mobile develop 5G technology and is involved in China’s 5G standard development trials. It has similar partnerships in the U.S. and Europe.

The Committee on Foreign Investment in the United States (CFIUS), which vets acquisitions of U.S. corporations by foreign companies, said the Broadcom takeover risked weakening Qualcomm, which would boost China in the 5G race.

A Broadcom takeover could see the company cut research and development spending by Qualcomm or sell strategically important parts of the company to other buyers, including those in China, officials and analysts said.

As such concerns emerged, Broadcom immediately jumped into action, pledging to invest in Qualcomm’s 5G technology and accelerate its move to the United States. But the plan didn’t go down well with CFIUS.

The clash marked a sharp fall from grace for Broadcom, whose chief executive, Hock Tan, Trump welcomed to the White House last year to announce a plan to move its headquarters to the United States. At the time, Trump called it “one of the really great, great companies.”

Led by Tan, a Harvard-educated Malaysian entrepreneur, Broadcom grew largely through acquisitions. Tan is an aggressive dealmaker and built the $100 billion chip giant up from a business worth just $3.5 billion in 2009.

Until the Qualcomm bid, its biggest deal had been the $37 billion acquisition of Irvine, California-based Broadcom, where the company, called Avago Technologies at the time, got its current name.

Qualcomm executives acknowledge the tricky relationship the firm has in China, especially with local companies like Huawei, which is spearheading China’s 5G push.

“Our relationship with Huawei is complex; I don’t know if there’s a good word for it,” Amon said in Beijing in January, adding that the company was a big supplier to Huawei while also being a competitor with Huawei’s semiconductor business.

Although Huawei is in a strong position to supply 5G network equipment to carriers in many large markets – with the notable exception of the United States – it still has to license some technologies from Qualcomm, which owns more 5G patents than any other company in the world.

Trump is seeking to impose tariffs on up to $60 billion of Chinese imports and will target the technology and telecommunications sectors, two people who had discussed the issue with the Trump administration told Reuters.

“I would imagine relationships that we have in China, and probably the symbiosis of that relationship, it will play a very strong role with the (Chinese) regulators’ view of the future of Qualcomm,” Amon said in January.

And the Broadcom takeover case highlights a growing risk for U.S. companies in China.

“It’s an unenviable position because they are pretty dependent on China,” said Andrew Gilholm, director of analysis for China and North Asia at risk consultancy Control Risks, referring to Qualcomm.

“They are an extreme case but as more and more sectors become effectively considered ‘strategic’ from a comprehensive national security perspective, more and more companies are facing this kind of squeeze between the U.S. and China.”