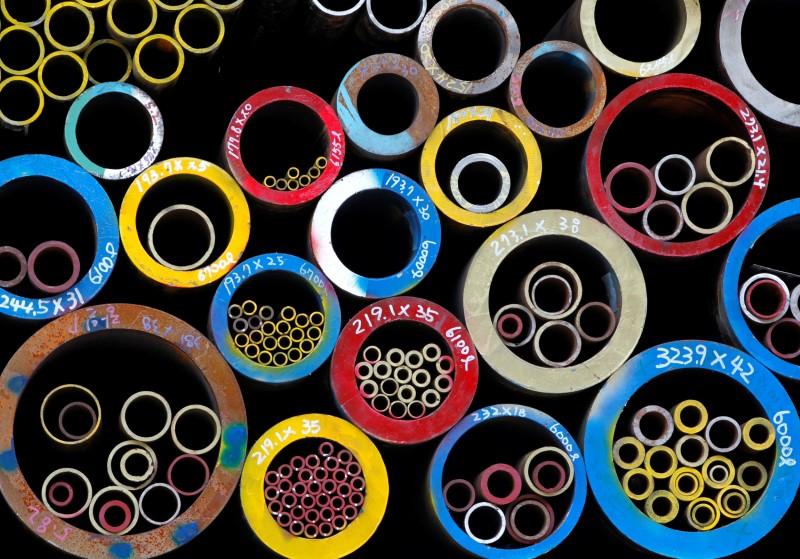 SEOUL/SYDNEY (Reuters) – U.S. President Donald Trump’s planned tariffs on steel and aluminum risk retaliation from other economies and could cost jobs, Australia’s trade minister said on Friday, while China predicted harm to trade if other countries follow the example of the United States.

FILE PHOTO: Steel pipes for sale are displayed at a shop in the Mullae-dong steel product district in Seoul July 13, 2010. REUTERS/Jo Yong-Hak/File Photo

Trump said the duties of 25 percent on steel and 10 percent on aluminum would be formally announced next week, although White House officials later said some details still needed to be ironed out.

“The imposition of a tariff like this will do nothing other than distort trade and ultimately, we believe, will lead to a loss of jobs,” Australian trade minister Steven Ciobo told reporters in Sydney.

“My concern remains that on the back of actions like this we could see retaliatory measures that are put in place by other major economies. That is in no-one’s interest.”

Australia, which has championed the free-trade Trans Pacific Partnership that Trump pulled the United States out of, has sought an exemption for its steel and aluminum exports to the United States, Ciobo added.

Steel has become a key focus for Trump, who pledged to restore the U.S. industry and punish what he sees as unfair trade practices, particularly by China.

Although China only accounts for 2 percent of U.S. steel imports, its massive industry expansion has helped produce a global glut of steel that has driven down prices.

“The impact on China is not big,” said Li Xinchuang, vice secretary-general of the China Iron and Steel Association. “Nothing can be done about Trump. We are already numb to him.”

South Korea, the third-largest steel exporter to the United States after Canada and Brazil, said it will keep talking to U.S. officials until Washington’s plans for tariffs are finalised.

“For us, the worst case scenario was a 54 percent tariff,” said a South Korean trade ministry official who declined to be named as he was not authorized to speak to media.

Nonetheless, if Trump pursues his proposal for a 25 percent global steel tariff,“that will still affect our steel exports to the U.S,” the official added.

Canada, Brazil and the EU said they would look to take action over the tariffs.

Moody’s Investors Service noted that steel and aluminum are not a major economic factor even for big Asian exporters, typically accounting for less than 1 percent of gross domestic product or exports.

Asian steelmakers, however, do worry U.S. tariffs could result in their domestic markets becoming flooded with steel products that have nowhere else to go.

“We are concerned about how other exporters react, what will happen with steel that cannot be sold to the U.S.,” Vikrom Wacharakrup, chairman of the Federation of Thai Industries’ iron and steel industry group, told Reuters. Thailand exports steel mainly to Asia but also the United States.

The Trump administration also cited national security interests for its action, saying the United States needs domestic supplies for its tanks and warships.

Contrary to the action announced by Trump on Thursday, the Department of Defense had recommended targeted steel tariffs and a delay in aluminum duties.

“We continue to seek clarification,” said Japanese Trade and Industry Minister Hiroshige Seko.“I don’t think exports of steel and aluminum from Japan, which is a U.S. ally, damages U.S. national security in any way, and we would like to explain that to the U.S.”

India also raised concerns about the use of the U.S. national security interest provisions, under what is known as a Section 232 investigation.

“We have only 2 percent of our exports to U.S. so no immediate dent, but validity of Section 232 is stretched to be used as a tariff barrier,” India’s Steel Secretary Aruna Sharma told Reuters.

Trump believes the tariffs will safeguard American jobs but many economists say the impact of price increases for consumers of steel and aluminum, such as the auto and oil industries, will be to destroy more jobs than they create.

Japan’s Toyota Motor Corp said the tariffs would substantially raise costs and therefore prices of cars and trucks sold in the United States.

“The world stands on the brink of a trade war as Donald Trump announces severe tariffs on steel and aluminum – forget the yield curve – this is how recessions start,” said Robert Carnell, head of research, Asia-Pacific at ING in Singapore.

“Trade is just about the only thing economists are agreed on – more is better,” he said.