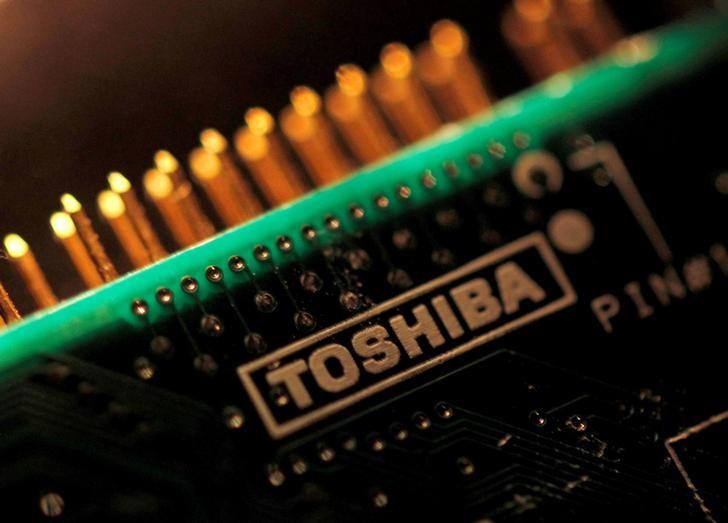 TOKYO (Reuters) – Japan’s Toshiba Corp faces a Friday deadline to win Chinese antitrust approval to sell its prized $18 billion memory-chip business by end-March, raising the possibility the deadline may be missed and that it will seek alternatives such as an IPO.

FILE PHOTO: A logo of Toshiba Corp is seen on a printed circuit board in this photo illustration taken in Tokyo July 31, 2012. REUTERS/Yuriko Nakao/File Photo

The conglomerate agreed last year to sell the world’s second-biggest producer of NAND flash memory chips to a consortium led by U.S. private equity firm Bain Capital to plug a huge financial hole left by the bankruptcy of its U.S. nuclear unit.

The company has been aiming to complete the sale by March 31, the end of its business year. It said in September that it would need approval from antimonopoly authorities by March 23 to meet that deadline.

Toshiba no longer faces immediate insolvency or a delisting even if it does not meet the end-March deadline for the sale as it has raised funds from a share issue late last year. But the deal is still key to its plan to rebound from a $1.3 billion accounting scandal and a crisis in the nuclear power business.

One source briefed on the matter said the chance of finalizing the sale by end-March is slim, since China had not yet given its antitrust approval.

Another source with direct knowledge of the matter said antitrust approval must come by early next week, if not on Friday, if it were to meet the deadline.

Missing the end-March deadline for the sale of the chip unit to the Bain consortium gives Toshiba the option of walking away without penalties, people briefed on the matter said.

Those people said Toshiba could listen to activist shareholders who oppose the sale saying the $18 billion price tag undervalues the business. Hong Kong-based Argyle Street Management, a hedge fund with $1.2 billion under management, has said the board should consider an IPO instead.

A Toshiba spokesman said the company continues its effort to close the deal by the end of this month. Bain declined to comment.

China’s commerce ministry did not immediately respond to a faxed request for comment.

The sources asked not to be named because the information is private.

The flash memory chip business has been the source of most of Toshiba’s earnings as the company struggles to grow other core businesses such as social infrastructure.

Toshiba shares closed 2.5 percent lower on Friday. They rose earlier this year but have given up the gains to be flat so far in 2018.