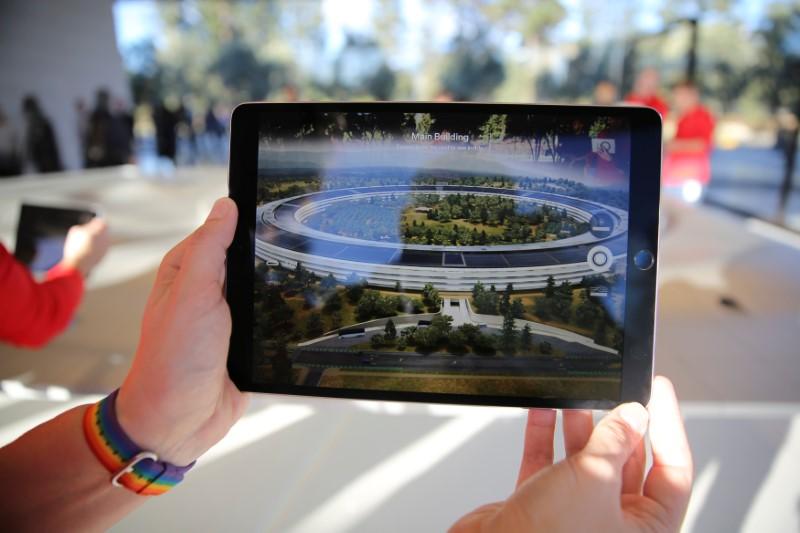 CHICAGO (Reuters) – Apple Inc on Tuesday was widely expected to announce a lower-priced iPad aimed at helping it grab more of the U.S. educational market.

FILE PHOTO – An Apple employee uses an iPad with an augmented reality app on it to show off features of the new Apple Park at the Apple Visitor Center in Cupertino, California November 17, 2017. REUTERS/Elijah Nouvelage

Major technology companies are battling for dominance in U.S. schools, a market seen as important for hooking young consumers.

Apple in March 2017 lowered the price of its 9.7-inch tablet to $329, the lowest starting price ever for one of its full-sized tablets. But laptops running operating systems by Alphabet Inc’s Google or Microsoft Corp can be had for less than $200.

Apple’s previous price cutting, along with software changes, have been followed by an improvement in iPad sales. Analysts believe the teacher- and student-geared event on Tuesday at Lane Tech College Prep High School will include an update to its iPad lineup, including possibly a lower-priced model.

Apple made up just 17 percent of the K-12 U.S. educational market in the third quarter, according to data from Futuresource Consulting. Meanwhile 60 percent of mobile computing shipments to schools ran Google’s Chrome operating system, and 22 percent had Windows.

Chromebooks sold by Dell Technologies Inc can be had for as little as $189. Microsoft last year introduced an education-focused laptop from partner Lenovo Group Ltd running Window 10 S.

Apple in recent years made changes to its operating system so that more than one student can log into an iPad, and to its software to let teachers better manage groups of students.

But it faces a tough battle in the educational market given the popularity of Google and Microsoft’s cloud-based productivity suites, said Carolina Milanesi of Creative Strategies. Google’s G Suite fueled Chromebook sales because it was seen as easy to use to manage assignments.

“Most teachers don’t look past G Suite for education,” she said. Apple has iWork, which added features in recent years but remains less familiar to teachers than Google’s productivity suite or Microsoft’s Office.

Education sales for iPads rose 32 percent to more than 1 million units in Apple’s fiscal third quarter. Sales of iPads made up just 8.3 percent of Apple’s $229.2 billion total revenue last year, however, compared with the nearly 62 percent of sales generated by iPhones.

Apple needs to keep working to regain market share in schools to get children interested in its devices later on, said TECHnalysis Research founder Bob O’Donnell.

“It’s more about the psychology of driving long-term preference for the (Apple) platform. It’s more strategic than financial,” he said.